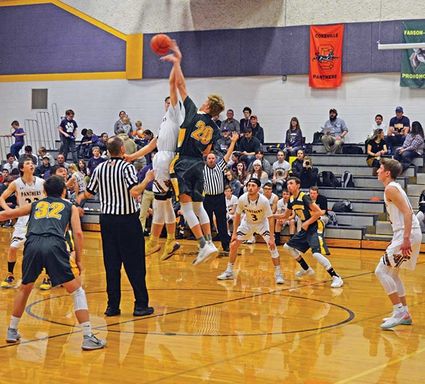 Sam Schneider goes in for the tip-off against Farson-Eden on Thursday.

The Saratoga Panthers suffered a conference loss over the weekend as they hosted the Farson-Eden Pronghorns (15-3, 4-1) for a makeup game following the cancellation of the original game in mid-January. Earlier in the week, however, the Panthers were hosted by the Hanna, Elk Mountain and Medicine Bow (HEM) Miners (8-6, 2-0) for a rematch where Saratoga saw another victory over the Miners.

The last time the Panthers and HEM faced off was on Dec. 18, just before winter break, in a game that saw a high amount of frustration from both teams, as well as their fans. In the pre-Ch...