Panthers send only four to grapple at Saratoga Quad 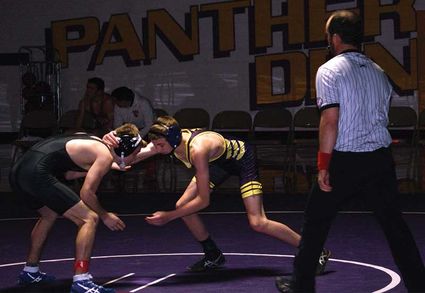 Panther Jerry Everett gets to take down his opponent in the 113 pound weight class at the Saratoga Quad.

The Saratoga Panthers wrestling team has been hit by injuries, health problems and attrition to a point that the team is down to seven grapplers.

"We have seven individuals that, as long as health stays intact, will represent us at regionals and state," Head Wrestling Coach Zach Schmidt said.

His wrestlers that were able to wrestle on Friday in Saratoga were Jerry Everett, Andrew Everett, John Powell and Tristan Gray.

"John Powell has been phenomenal," Schmidt said. "He did a great job this weekend. He wrestled well at the dual and wrestled four kids in Rawlins that were ranked in 3 A and...