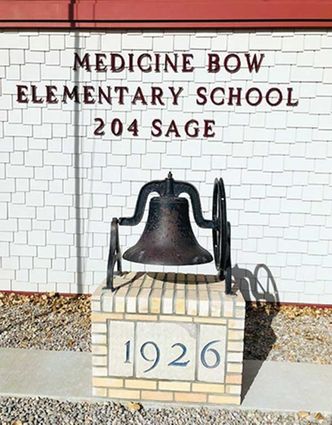 The Medicine Bow school bell on top of its new pedestal at MBE.

On Jan. 21 at 4 p.m. at the Medicine Bow Elementary School (MBE) there was a ceremony presented by students and staff of the school honoring a bell that started ringing students to come to school 93 years ago.

"It was really good," Traci Schneider, principal of MBE, Hanna Elementary and Elk Mountain Elementary said of the ceremony.

"It was fantastic," Superintendent of Carbon County School District No. 2 Jim Copeland agreed.

According to the presentation, the MBE bell began its life 1,356 miles away in Hillsboro, Ohio where it was cast by the CS Bell Company. The bell was cast in the foundry on Oct. 28, 1925. It is believed the bell came by train in 1926 when the town of Medicine Bow built a red brick building and started the first high school.

The bell was originally used as a signal to students to start or end their day. It is also believed it may have sounded when it was time to eat lunch. MBE students and staff found, in looking at the history, that the school bell was also used to warn people in town of any danger or to honor someone in the community when they passed away.

In 1963 the Old Elementary Brick building was demolished to make room for a new high school. No longer having a home inside of the building, the bell was purchased from School District No. 6 by the Smith family for $15. It sat in their backyard until a platform was constructed using the red brick from the original building and was placed in front of the high school.

The Smith family eventually decided the bell should be in front of MBE since the high school closed.

The bell has seen some damage throughout its 93 years of service. This year it was given a little extra TLC by local Hanna resident Dave Sutter and moved to its current location in front of MBE.

Medicine Bow resident Charlie George donated bricks to create a new platform for the bell. These bricks were from the old high school building that was torn down to make way for the current elementary school building. The red bricks from the original platform were crumbling and couldn't be salvaged. 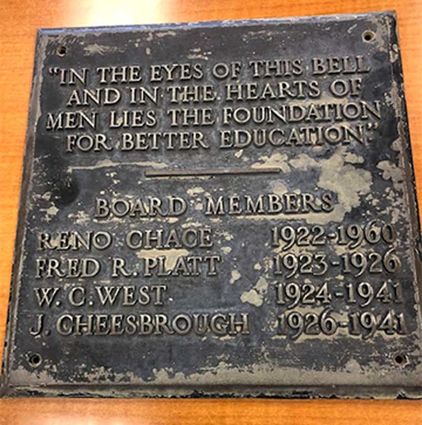 The original plaque was included in the bell presentation.

The 1926 date plate from above the front door of the red brick school was also salvaged and included to stand as a reminder of the bell's historic past.

The bell now stands outside the doors for all to see. A plaque on the side of the bell purchased by the group of board members that ordered the bell back when it first came into service reads:

"In the eyes of this bell and in the heart of men lies the foundation for better education."

The bell no longer rings, but the words are as true today as they were when the bell was cast.

MBE's staff and students said the bell's presence is now hard to miss and they would like to thank the current board for ensuring the bell is taken care of for now and years to come.