The once and future mayor 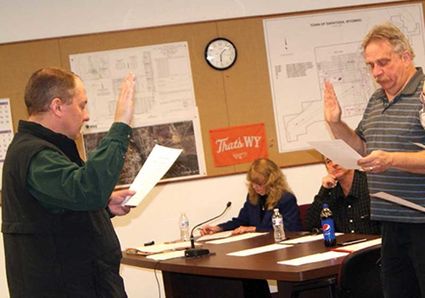 John Zeiger, the newly elected mayor of Saratoga, said he was somewhat surprised when he won in November.

Zeiger said the reason he got into the race in the very beginning was he felt that the residents of Saratoga needed a choice to vote for mayor.

"It wasn't until the Saturday before the primaries that I even decided to even shoot for the write in vote. I had a few people come to me and ask if it would be okay if they wrote me in, would I accept," Zeiger said. "I told them it would depend if I got enough votes to be a plausible candidate."

Zeiger said if he received only 20 votes to 200, he would not have run. He got 75 and Dan Starr, the other write in, got around 50 votes along with some votes to other candidates, so Zeiger felt there was a chance.

"I knew it was going to be a challenge, but I felt it was reachable," Zeiger said. "I decided to go for it."

Zeiger had previously been the Saratoga mayor from 2005 to 2015.

Zeiger said besides wanting to give people a choice, he had left office with the town cash reserves sitting at $2 million and, currently, the reserves are much less.

"When I left office, our reserves sat at around $2 million dollars and when I learned the reserve account had dropped to around $630,000, I just felt that wasn't the figure a reserve account needs to be," Zeiger said. "This isn't to say the prior administration did anything wrong, but the federal government isn't going to always come in and help like it has in the past and it could hold communities to solve their own issues. I just felt we had to get the reserves back up."

He said a town can never know when and what type of catastrophe will come.

"The sawmill fire could have been devastating if our firefighters hadn't been so good or the wind had changed direction towards the town," Zeiger said. "The river has had the town have some moments of concern, so it is good to have a strong reserve."

Zeiger said he knows the government won't abandon the town if a catastrophic situation occurs, but he really feels a strong reserve is necessary.

The mayor said he has met with department heads and the new council and explained his position on getting the reserves up and there was agreement this was a positive goal.

"I have a council that feels strongly on getting the reserves back up," Zeiger said. "Also recreation is very important to me, whether it is bringing people into town to spend money at our local businesses or for our residents to enjoy."

He said the pool price increase this summer for anyone not local might not have benefited the town by having families from outlying jurisdictions think twice about coming.

"In my opinion, I think it is a lot better to have 40 people using the pool at one dollar versus 20 at two dollars, even though we make the same amount," Zeiger said. "Those people that come from out of town to use the pool usually spend some money in Saratoga, whether it is gas and snacks or having lunch or dinner. Plus, the Valley is one big town if you think about it and recreation is such a big part of what this area offers. I think we should be inclusive with our neighbors."

Communication with the public is an aspect Zeiger wants to bring into the new administration.

"I hope the people are going to see a better communication system than we have seen in the past four years," Zeiger said. "So far this council has demonstrated they are good communicators with the public."

Zeiger has already met with the town employees and wants to have regular meetings to listen to their concerns and advice.

"Our goal is to have these employee meetings quarterly and have a department head meeting quarterly," Zeiger said. "It comes back to communication."

Zeiger said he is very supportive of events with healthcare projects that have been going on, but he believes the town should not be in the healthcare business.

Zeiger said he wants to try and schedule a day each month if possible that is an open house.

"We would do an open house for a couple hours on a day we choose where the public can come in and visit with council members and employees," Zeiger said. "Again, I will say, it comes down to having good communication and I want to do my best to make sure it happens."