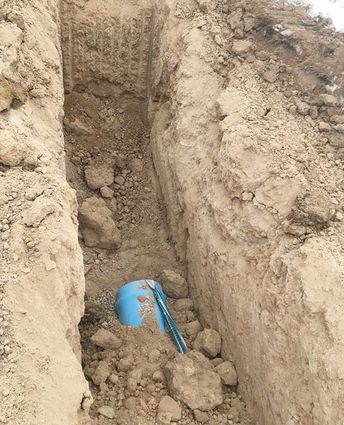 The first meeting of the new year for the Carbon County Impact Joint Powers Board (CCIJPB) at 6 p.m. on Jan. 9 saw few changes as the board members welcomed new town council representative Jon Nelson and returning member Richard Raymer, now serving strictly on the CCIJPB. Officer elections were held, with few changes, and board member Roger Cox, along with Nelson, provided an update on the water and sewer line project at the United States Forest Service (USFS) Brush Creek/Hayden District Office.

Since the partial government shutdown, which was on day 19 the evening of the meeting, employees of the USFS have been on furlough. While the Forest Service was unable to work, the contracting company tasked with the water and sewer line project, Trinity Management Group, continued to work. According to Cox, both himself and Nelson visited the site on Jan. 5 and inspected the work being done.

"Jon (Nelson) and I just happened to be driving by and noticed they were working on Saturday and we just stopped and inspected. It was obvious, to me, they were doing the work on Saturday figuring there'd be no one watching what they were doing," said Cox. "Jon Winter had been out there on Friday and they had actually discussed a few concerns that Jon (Nelson) and I had noticed, but then Chuck McVey had been there that morning and I'm sure they thought they just had the rest of the day."

According to Cox, both he and Nelson observed the contractors putting frozen backfill in the trench, something that had been stressed to Brush Creek/Hayden District Ranger Jason Armbruster during December's meeting shouldn't be done and was also, warned against in the USFS project manual for the water and sewer line.

"We questioned whether they had the adequate bedding ... but we didn't go to dig it up or anything because we didn't have any of our proper personal protection (sic) equipment. So the contractor volunteered to go down there and dig himself a hole and show us how it was bedded. We didn't tell him where to dig and, unfortunately for him, he picked the wrong spot to dig. He had a great big frozen clod in there, he had sagebrush in there and no bedding," Cox said.

In the project manual for the construction of the water and sewer line, made available to the Saratoga Sun, the manual reads "Do not backfill or construct fills during freezing weather. Backfill or construct fills only when temperature is 35 degrees Fahrenheit and rising" and "Do not use frozen materials, snow or ice in any backfill or fill area." The manual also reads that, for the compacted trench backfill, the backfill must be "free of debris, organic material and stones ... without masses of moist, stiff clay or topsoil."

The manual also required that both water and sewer lines should have gravel bedding both below and above the pipe which, according to Cox, was not present in the hole that had been dug by the contractor.

"It was obvious to me that they thought they were going to get everything done that day they could without anybody watching," said Cox. "There isn't anything I feel that Jon Winter or Chuck McVey did wrong on that because it is not the Town's responsibility to be up there inspecting a job. The Forest Service is the one that needs to be inspecting the job."

"They were digging for the hill," added Nelson.

"If it's not being installed correctly, we can always tell them 'Until you can prove to us that it was installed according to plan, we're not turning that valve on. Period,'" said CCIJPB Vice-Chairman Craig Kopasz.

Nelson stated that he had sent an email to Jacob Brown, the Contracting Officer's Representative for the Brush Creek/Hayden District, and Armbruster with his observations and concerns regarding the work done by the contracting company.

"Did you get an email back, or reply, from the contracting officer with the forest service?" asked CCIJPB board member Joe Parsons.

"Not from the contracting officer, but I did get a response today from Jason Armbruster saying, it was one line, 'An order to suspend was issued to the contractor on 1/7.' That was it," replied Nelson.

When asked by the Sun if it was common for a contractor to continue working despite a partial government shutdown and a federal government agency being placed on furlough, Nelson stated that, in his experience working for the federal government, stop orders were usually issued the same day of a furlough. 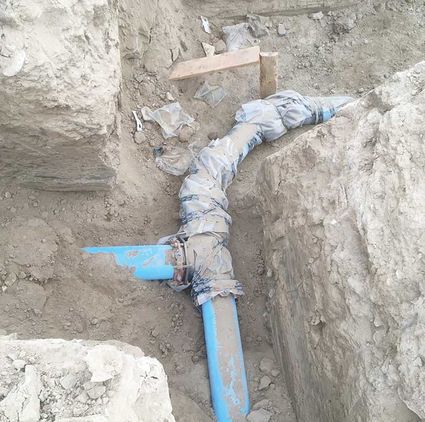 large chunks of frozen dirt appear in a sewer trench.

The joint powers board then discussed what official action could, or should, be taken. It was decided that an official letter would be written by Winter, and read by Town of Saratoga attorney Tom Thompson, informing the USFS that the CCIJPB would need to see the corrected mistakes on the water and sewer line and that the joint powers board would not be accepting the water line on day one, but would wait a minimum of one year before taking over the line.

The next meeting of the Carbon County Impact Joint Powers Board will be at 6 p.m. on Feb. 13, 2019 at the Saratoga Town Hall.