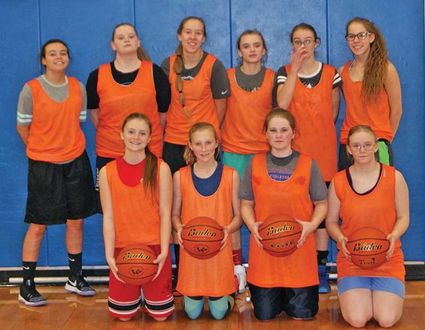 Jackie Jones, head coach for Hanna, Elk Mountain, Medicine Bow (HEM) High School ladies basketball team, said she knows her team is full of tremendous potential to do well this year. She tempered her optimism with acknowledging her team was young and that only four girls from last year's team are returning.

She said the test of her team will be coming on Dec. 7 with the Carbon County Invitational where they will first encounter Meeteetse and Dubois.

"Those are two physical teams that have some size, so we hope to use our speed," Jones said. "Speed is how we are looking to force plays, because matching up size wise this year will probably be our Achilles heel."

The size factor is not worrying for Jones.

"We have some young ladies that are stepping up to the plate in that area," Jones said. "Our younger players and our new players have been doing well. Our practices have looked good."

She said the team was strong in spirit.

"That competitive spirit is there," Jones said. "They are not afraid to push each other to make each other better, which, from a coach's view, is real nice."

She said Jessica Nelson, Amy Campbell, Madison Campbell and Taylor Scott have proven they can play well together and make plays happen as the returning players from last year. Jones added Rainey Wilson and Adrienne Broadwater have been showing standout performance from practice.

Jones said the way this team is hoping to play this season is not only with speed, but to be smart and play as a team.

"I know the girls can do this because of how well we did in volleyball this year," Jones said, "but basketball is a game that requires different coordination, strategy and awareness on the court. However, if the girls come together as a team the way I know we can, our season should go just fine."

The Lady Miners will get a chance to see how far they have come since the first days of practice at the Carbon County Invitational.