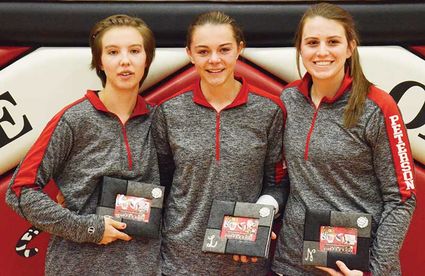 From left, Taylor Huntley, Lauren Buford and Noelle Peterson pose with their photo albums before their final game.

On Oct. 20, the Encampment Lady Tigers played their final game of the season in front of their home crowd as they took on the Hanna, Elk Mountain and Medicine Bow (HEM) Lady Miners. The mostly young team went through the year without a single conference win, but near the end of the season saw several non-conference victories, including their final game against HEM. For three Lady Tigers, that game would be the final match of their high school career and the final time they would put on the red and black.

Lauren Buford, Noelle Peterson and Taylor Huntley, won't be returning to the court next...