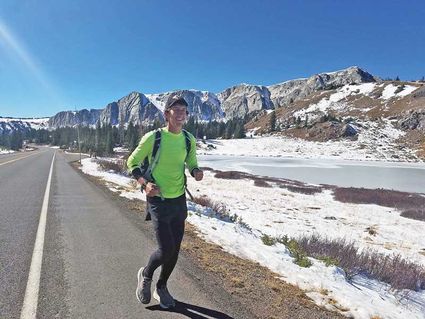 Noah Fredenberg continues his run over the Snowy Range.

Wyoming is not a small state. With a length of about 360 miles, a width of 280 miles and sitting at 97,814 square miles it is the 10th largest state in the nation. On Oct. 10, Noah Fredenberg began running 450 miles of the Cowboy State for a non-profit he founded with his sister, Molly Fredenberg, MeUsWe. With a goal of completing the 450 miles in two weeks, Noah has been focusing on the running while Molly has been going ahead and getting the word out.

"We're originally from Montana, but he lived with me in New York for two years and he went to a fashion institute and he has a men's wear design degree. And I'm a makeup artist. So it makes total sense that we'd be running across Wyoming."

Molly Fredenberg is a freelance makeup artist currently living in Brooklyn, NY. Her brother, Noah, lives in Los Angeles, Calif. and both siblings were raised in Montana. Despite being on separate coasts, the brother and sister have both spent time in the Cowboy State.

"My brother and I have lived in Wyoming in the past. I was in Laramie, he was in Jackson. Separate timing," said Molly.

When Molly lived in Laramie, she worked with the Cathedral Home for Children (CHC) for a year, a non-profit organization that aids at-risk youth in the area and includes the Laramie Youth Crisis Center and the Carbon County Youth Crisis Center.

"(The) majority of my career is working with kids, so it's kind of a funny switch to go into makeup in New York, but I've nannied, I've worked in schools, worked in homes, worked with families and then I worked at Cathedral Home."

While her time helping out at CHC was short, it certainly had an impact as it led her to co-found MeUsWe with Noah. While they plan to run from coast-to-coast in April 2019, starting in LA and ending in NYC, the siblings wanted to start out with a smaller run to begin to raise awareness for their non-profit.

MeUsWe has set themselves a goal of $20,000 to be raised by Dec. 15 with 25 percent of the donations going to CHC with the intention of "creating an epic, family style Christmas" according to their website, meuswe.org.

"A lot of the kids don't have family they can visit for the holidays so they create a whole family banquet, family style Christmas for them," Molly said.

The rest of the money raised will go to MeUsWe as they prepare for the "long run" from California to New York with the intention of raising money and awareness for at-risk and foster youth.

"From what I've experienced with kids," said Molly, "the most important thing you can give to them is your time and your attention and also allow them to have a voice and be heard. I think everybody has been a teenager at one point and has felt like you were not respected, that your opinion was not heard, validated or respected."

While the "pre-run" across Wyoming will benefit CHC, it is also providing benefits to Molly and Noah in experience for when they begin their nationwide run next spring. 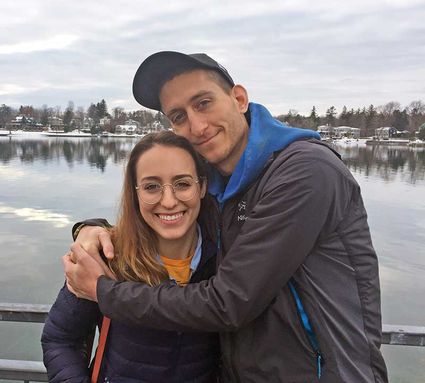 Molly Fredenberg and her brother, Noah, pose for a photo.

"Not having service has been a joy, because I'm already 'directionally challenged.' So he's like 'Meet me at this point, which is kind of by this exit but you have to down this gravel road.' We're basically going off of dropping a pin on Google Maps, but sometimes it will disappear because I don't have service or internet. There's been a couple times where I picked him up late and he was really cold and tired," Molly said.

As of Oct. 23, Noah will have completed his run, but the goal that MeUsWe has for fundraising will still be going. Those wanting to know more about the non-profit organization or Noah's run can visit their Facebook page at www.facebook.com/meuswemovement, on Instagram @meuswemovement or online at meuswe.org.