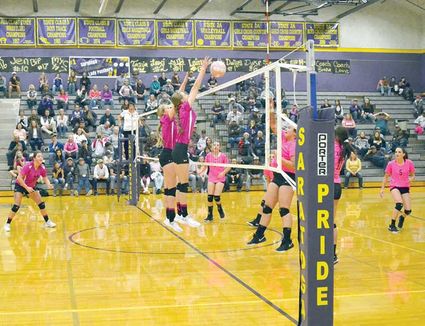 Lady Panthers Makiya Johnson and Taylor Bennett get a block in front of a good crowd in their home court finale Thursday.

The Saratoga Lady Panthers only had one game before the end of their regular season as they faced off against conference foes the Little Snake River Valley (LSRV) Lady Rattlers (19-25, 25-14, 15-25, 25-21, 15-13) on Thursday evening, ending the evening 3-2. With it being their final home game, Saratoga Middle/High School honored three seniors, Tiffany Bauer, Mychaela Jackman and Lairren Peebles, before the start of the varsity match. Along with the celebration of the senior athletes, both teams were clad in two different shades of pink as the teams held a "pink out" for Breast Cancer Awareness month.

The first set between the No. 2 ranked Lady Panthers and the No. 4 ranked Lady Rattlers (2-6, 6-11-2) saw LSRV win and determined to ruin the celebration for the senior athletes of Saratoga. For most of the match, in fact, the team that played on the left side of the court would end up winning the set.

Aubrey Berger led the attack against the Lady Rattlers, attacking the net 50 times and having 15 kills. Jenna Dew attacked 30 times and had eight kills and Makiya Johnson had 47 attacks and eight kills. 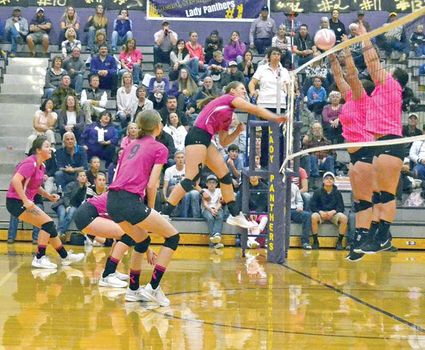 Aubrey Berger gets up in the air for a spike Thursday.

Taylor Bennett, who has spent the season as the lead blocker, continued leading with four blocks against LSRV. Johnson had two blocks and Dew, Bauer and Berger each had one block. Saratoga's libero, Tasia Daley, dug deep with 33 digs throughout the match. Berger had 23 digs and Jackman had 22.

When it came time for the tie-breaking fifth set, a coin toss determined who would play on which side of the court. Winning the toss, the Lady Rattlers chose the left side. The determined Lady Panthers would not let LSRV win another set, however. While the final set was point-for-point, Saratoga was finally victorious and sent the Lady Rattlers back to Baggs with a loss.

With the regular season over, the Lady Panthers head to the 1A West Regional Tournament on Oct. 26 in Lander where they will face off against the No. 3 Northwest ranked Dubois Lady Rams (4-4, 8-12) at 2:30 p.m.