Command and Control at the Ryan Fire

Crews from across the country fight, give views of the Ryan Fire 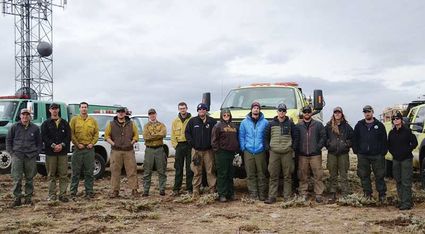 Members of Division Echo and structure protection pose for a photo following interviews on Thursday, Oct. 4 on Coyote Hill. As of Monday, the Ryan Fire was just over 28,000 acres and 60 percent contained.

Much needed cooler temperatures and precipitation arrived on the evening of Wednesday, Oct. 3 which aided with the ongoing fight against the Ryan Fire. Since then, temperatures have remained relatively low and areas of the county have seen continued rain and, in some cases, snow. As of Monday morning, the fire had not grown beyond 28,585 acres and went from being 35 percent contained to 60 percent contained.

As has been seen in the daily maps released by the National Incident Management Organization (NIMO) that took over management of the Ryan Fire, there have been six different divisions working on the blaze that began nearly a month ago. One of those divisions, Division Echo, are working on the fireline closest to Wyoming Highway 230 and are comprised of personnel from across the state and the country.

David Hamilton had the shortest distance to travel as he is part of Laramie County Fire District (LCFD) No. 2 in Cheyenne. As of Oct. 4, Hamilton had been on the fire for a total of 11 days and was joined on his truck by two other members of LCFD No. 2. While he has been a member of the fire district since 2014, Hamilton has only been around wildland fires since 2017.

"On this fire, we're structure group so we're doing pinpoint protection on structures, keeping them as safe as we can. Keeping us safe," said Hamilton of his team's role on the fire. "We set up pumps and sprinklers and water sources, prep the houses. Whatever we can to help keep it so the fire can slow down."

This often means doing scratch lines around structures, which involves removing any vegetation or lighter fuels and getting the area down to bare ground. In most cases, doing these scratch lines work in keeping structures safe-but fire is always unpredictable.

"In California, we preach on defensible space a lot, so clearing the brush, clearing up to 100 feet, if not more, away from your house," was recommended by Steve Savoroski, a wildland firefighter from the El Dorado National Forest in eastern California.

As of Thursday, Savoroski had been on the Ryan Fire for 10 days and had been on the fireline when it made its third consecutive weekend growth. According to the 10 year wildland fire veteran, the fire behavior seen here has been similar to that in his home state.

"The fire moves pretty quick. It's been real wind driven out here in places, topography driven. I see a lot of the same fuel type, sage and grass," Savoroski said.

Although a little overwhelmed during the weekend of Sept. 28 by the continued growth of the fire, he stated that he quickly came back to reality and focused on why he was there: structure protection.

"(I) Started figuring out where all the structures were, being on the structure group, and provide all the necessary help we can do with that," said Savoroski.

The decade of California experience has come in useful for other personnel on the Ryan Fire who have not seen similar fire behavior to what has been shown in the last month. Two of those benefiting are Misty Hadermann and Cameron Butler, both of the Oregon Forestry Division, Tillamook District and are working in Division Echo. Hadermann, who recently returned to ODF, has nearly two decades of fire experience.

"This is my first year back with the Tillamook District, but I've been in fire for 18 years, though," said Hadermann. "This fire's been pretty exciting, we've been chasing fire everyday. The fire behavior has been exciting and giving us a chance for my partner here to experience things he's never experienced before and great learning opportunities for both of us."

"Being my first out-of-state dispatch, I've seen more country than I have, really, in the state of Oregon and I've seen fire behavior here that I haven't seen in Oregon and it's a whole 'nother world out here," said Butler. "I've seen more explosiveness. Where we're from, we don't have the sagebrush. We're from the coast, so we have Douglas Fir, so we're used to fires that are up in the timber. Being out in the plain lands like this, with the sagebrush and how dry it is, I've never seen fire spread as fast as it has out here."

Hadermann and Butler drive a Type 6 fire engine, which gives them the ability to venture deeper into the timber and chase after hot spots from the fire, something that the Type 3 and Type 4 fire engines are unable to do because of their size.

Following the dry weather and increased growth of the fire, the structure crews and Division Echo were happy to get some much needed rest thanks to low temperatures, high humidity and plenty of moisture - even if that meant resting on their feet.

"If the roads weren't crummy, we'd be monitoring, making sure it doesn't grow. Picking up what needs to be picked up. There's a bunch of hose out there that was picked up yesterday, it was kind of a slow day yesterday," said Kyle Kuester, who is with the Bureau of Land Management Wind River/Bighorn Basin District. "The down time is good because if this weather breaks and it gets warm again, that thing can stand back up and it'll be another long week. So these down days are good for morale, just to kind of reset in a way."

On days like last Thursday, and many of the days since then, crews have less to worry about in terms of fire activity and can begin working on mopping up after the fire, although they are still focused on keeping an eye on the fire itself. What they can begin working on, if the terrain isn't too wet, is reclamation.

"We want the land to look as close to what it looked like before we arrived." said Hadermann. "So, if we clean dozer line, we want to put the line back together so that, if there's cattle, the cattle don't injure themselves. If it's fencing, if we cut any fence line, we want to make sure that we put it back together."

Across the state line and sitting above Walden, Colo. at the Jackson County Fairgrounds is "fire camp." This is where the personnel fighting the fire return after long, 15-hour days to rest and relax. This is also where the nerve center of the whole operation rests. Inside the show barn are several yurts, each housing different departments operating with the Ryan Fire. Public information, demobilization, medical, etc.

In the walkway above sit Jesse Best and John Mason, air operation managers who keep an eye on the various aircraft aiding those on the ground via satellite. Two of those aircraft included the Sikorsky CH54-A and the Boeing CH-47D Chinook that were recently at Shively Air Field.

Best is from Montana and works for the Department of Natural Resources while Mason is from Georgia and works for the United States Fish and Wildlife Service and both have been involved with aviation in one form or another since the mid-1990s, though neither have a pilot's license.

Those moving parts also include figuring out when a crew is supposed to demobilize, or head home, after putting in their 14 days. This is where Mason helps as he puts in requests for demobilization and keeps track of the number of days a crew has been out working on fires. Sometimes, a crew will not always work on the same fire, but could spend seven days on one fire and seven on another.

Rest and relaxation is an important part of the job, especially since crew members from the top down put in 15 hour days and plenty of miles. Division Echo, for example, crosses the state line everyday, twice daily as they continue to fight the Ryan Fire. Those long days start with a briefing at 7 a.m., following engine checks and breakfast, before heading out and getting another briefing from task force leaders.

"Briefings are seven in the morning and then we don't roll back until eight or nine at night. Makes for a long day," said Kuester.

When the day is done, engines and their crews return to Walden for debrief and to prepare for the next day. Following all of that, crew members head to their tents and prepare to rest for the next day. Sometimes, this means reading a book while, for others, it means calling home and talking to loved ones. 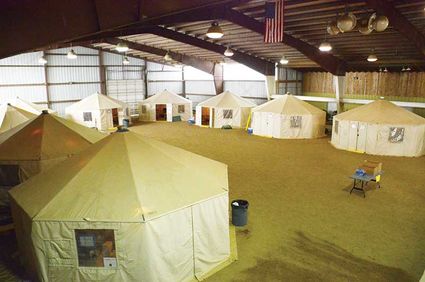 The Jackson County Fairgrounds house the fire camp and command center for those helping fight the Ryan Fire. In the enclosed arena, yurts containing critical departments are kept out of the elements.

"Usually it's back to base-camp, rehab whatever we need to rehab and get ready for the next day," said Hamilton. "You sleep when you can, you do what you can."

By the time this runs, a number of those working on structure protection or in Division Echo will be either ready to head home, heading home or already home. For some, home is not far away and they have spent days off in Carbon County. For others, home is thousands of miles away, but Wyoming will stay with them.

"Wyoming is beautiful. I was in northern Wyoming, so it's great to be down here in the south and see your country here. It looks a lot like eastern Oregon," said Hadermann.

"I absolutely love it. It's beautiful here. You can go from the mountains to the plains in no time and it's gorgeous," said Butler. "We really appreciate you guys having us here."

"I have never been to Wyoming nor have any of us. It's beautiful, it's very beautiful. I like it," said Savoroski.