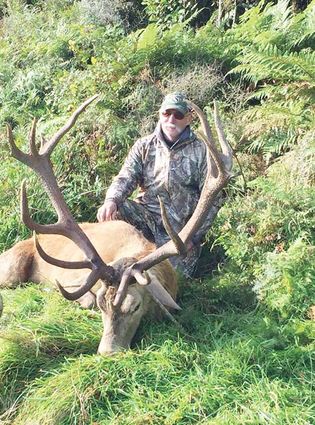 Bobby Berguson poses with his red stag in Christchurch, New Zealand in April.

In April, Encampment resident Robert "Bobby" Bergeson and his oldest daughter, Jana Runyan, had the opportunity to take part in a red stag hunt in New Zealand. Introduced to the islands in the late 1800s by European settlers, red deer adapted well to the lush climate and, with no natural predator, populated quickly. Though they are officially considered a pest, the antlers that are produced by the stags are considered among the best in the world.

Bergeson's son-in-law, Buck Runyan, was at a Ducks Unlimited event when the tickets for the hunt, from Wilderness Quest New Zealand, came up for b...