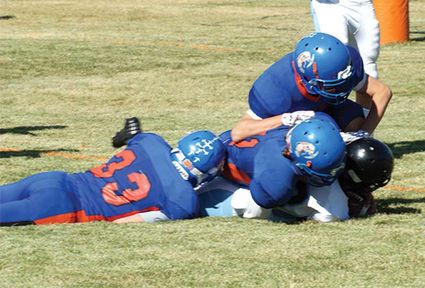 In a view that synopsized the game, HEM players gang tackle a NSI player Friday.

The Hanna, Elk Mountain, Medicine Bow (HEM) Miner football team got their first taste of home cooking Friday and kept at their winning ways against the Normative Services Institute Academy (NSI) Wolves, who were down from Sheridan.

It was the Miners' homecoming game and before the competition started, Carbon County Search and Rescue had a helicopter drop off the game balls for the upcoming football and volleyball matches.

The Miners had strong production from...