Rivers on the rise 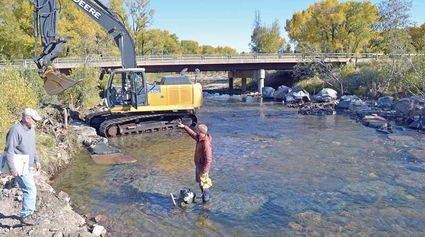 At the Riverside project TU project manager Jeff Streeter, left, discusses the A-shaped boulder structure being stood on by trackhoe operator Mike Werkeiser from Olsen Excavating Note the structure is submerged more in the center of the river and rises to each bank, funneling the water to the middle of the channel.

River restoration is a set of activities that aid in the environmental health of a river. Most of these projects are aimed at flood management, improving fish and game habitat, landscape improvement, bank erosion repair and more.

Four river restoration projects are currently ongoing with three proceeding on the Encampment River and one on the North Platte.

The benefits to River restoration are manifold as these projects aid agricultural producers in preventing loss of land due to erosion, help fisheries thrive, make rivers more navigable for those interested in floating and help define floodplains.

North Platte River Water Project Manager for Trout Unlimited Jeff Streeter explained bank correction like this: "Erosion creates a sediment load that maybe the river cannot move as easily. When you have too much sediment it often deposits in the middle of the channel. When it deposits in the middle of the channel then you create more stress on the banks. Then you widen it out more and you have more sediment collected-and it's just a cycle-and pretty soon you have an oxbow lake and a new channel. That's fine where there is no infrastructure. Where you have infrastructure you can't let that happen. Where you have houses and bridges and watercrossings we've got to address those issues."

An 1,800 foot section of the Encampment River immediately downstream from the Odd Fellows Campground is now into the second stage of fish habitat restoration.

According to Joe Parsons, with the SERCD, the banks in this area were stable, but Game and Fish fish sampling showed the area consistently had the lowest pounds of fish per mile on the Encampment River. Parsons said this was because that stretch had been over widened and had become shallow. The solution here, according to Parsons, was to, "narrow it up, deepen some pools, put in some wood structures to create some holding cover and add deeper pools for over winter habitat and late summer habitat and add some boulder clusters mid channel so that fish can have some refuge mid channel."

Immediately downstream from the Odd Fellows restoration project the river was cutting a new channel and moving it away from the Pickett cabins. There was also an irrigation diversion that was being depleted due to the new course of the river.

Parsons said this 1,400 foot project was two-fold both in restoring the riverfront for the landowners and the irrigation water flow.

The Encampment River has widened considerably through Riverside where it flows under the HWY 230 bridge. Here WYDOT was concerned with that widening allowing the river to create scour around the bridge supports. The solution in this case was to narrow the channel and add features including an "A" boulder structure near the bridge which funnels river flow between the bridge's pylons-which should help with the design life of the bridge. The project also is designed to help with bank erosion just past the bridge.

Streeter said, "We're trying to soften the meander bends, we're making the riffles not as steep and longer, so they're gradual. We're trying to blend all components of the stream bed and river bank so that we can provide as much stability to the channel as possible, so this project will last as long as we can possibly make it." Streeter later estimated that these restoration projects could last as long as 25 years, if not longer.

For this project a 2,600 foot section of the North Platte that had serious widening and bank erosion problems was selected.

The contractors began by creating a temporary diversion to the river while damming off the section to be worked on.

The receding bank was then extended back out into the river about 40 feet and the river bed itself was then deepened.

When this work was completed, the dams were removed and river flow was restored while the temporary diversion was refilled decreasing the total width of the river about 200 feet.

While the work was not complete when the reporter was there, the results were already obvious. A much narrower, yet very much more navigable river, were becoming apparent. While there, Parsons pointed out the several "toe-ins" (rock outcroppings designed to mitigate future erosion), pour overs and deeper habitat pools which had been added.

When the need for a project is pointed out by a landowner, town or entity such as WGF, that section of the river is studied by a team of designers and a solution is arrived at.

Consideration in these solutions is given to landowner needs on both sides of the river. Landowner concerns include the fact that deeds for their land usually go to the center of the river. When a river moves and widens, ownership area becomes clouded. When a bank erodes, haying or grazing land is lost. When the river moves away from an irrigation ditch, that water is lost to the landowner.

All these factors are considered when coming up with a design solution.

These detailed designs, showing both an overview and cross sections of the river, are then given to contractors chosen to do the work.

Measurements must be taken both above and below the projects. These measurements are for turbidity, or how much sediment is in the river water. Heavy equipment working in a river stirs up a good deal of sediment and the DEQ monitors these daily reports for unacceptable levels.

At the Ryan reclamation project, vials of river water are taken then the collection vials are run through a machine that uses light to measure turbidity levels. At the Riverside and Pickett projects Rebecca Burton, aquatic habitat technician with WGF, takes daily photos above and below the project. These photos, which show water color, are used to check overall turbidity on that project.

The work is usually carried out in August and September when river flows are lower and fish spawning is not an issue. All of these projects must be completed by the Oct. 15 start of brown trout spawning.

As an example, the Ryan Ranch Phase 2 portion of the project has been contracted to North State Environmental out of Powell, Wyo.

The equipment being used there includes two large Caterpillar trackhoes and two dump trucks capable of hauling 25,000 pounds of material at a time along with support vehicles.

When the excavation is complete, restoration begins. To rebuild a large section of bank, trees are laid side by side perpendicular to the river with the root wads defining the new bank. Several of these trees may be stacked until a desired height is reached and as many are as needed go side by side for the length of the bank restoration. When this is complete, the trackhoes overlay the trees with material excavated from another area.

Boulders are placed within riffles to provide additional trout habitat and create a more natural-looking channel.

This is all done to a very specific plan and each trackhoe is equipped with screens that show the designer's plan in both overview and cross sections.

T.J. Wetherbee, Project Foreman for North State Environmental, said that the GPS (Global Positioning Systems) displays in the trackhoes allow the workers to place items such as boulders or trees to within one tenth of a foot of the designer's plan.

When all this is complete, vegetation (including willows and grasses) are transplanted onto the new bank so their root systems can cement the area in place.

These projects have been growing in acceptance with both landowners and river users lately. Phase 1 of the Ryan restoration was completed in 2016 and already the area seems natural with willows and grasses taking hold on the restored bank.

Parsons said there was resistance to these type of projects to begin with, but as the projects have been completed, the desirability of such projects has become evident.

Streeter said that at the Peryam project, completed in 2016, Game and Fish shocked the area before the project began. After the project was completed-and had regrown for two years-the Game and Fish came and shocked the area again and found a 400 percent increase in the number of fish along the length of the project. Along with that impressive result, the banks remained stable and the river was still flowing according to plan. 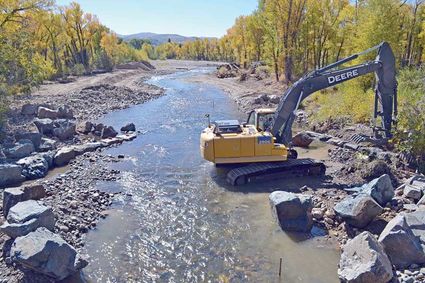 Works begins on the cross section of the A-shape structure at the Riverside project.

While Streeter was pleased with the result on the Peryam project, he was careful to say not all projects can expect that kind of success.

When these projects are ongoing, crews need a place to stay, eat and relax. Within the neighborhood of six workers per project, that number can add up quickly. Fuel suppliers also bring fuel to fill tanks at the various staging areas since the crew at the Ryan restoration alone uses 1,000 gallons of fuel every four days.

While Streeter said he had to talk people into doing these projects when he began doing this kind of work 10 years ago, now there are several landowners who are "ready to go." Parsons agreed with the sentiment saying he saw a bright future in river restoration.