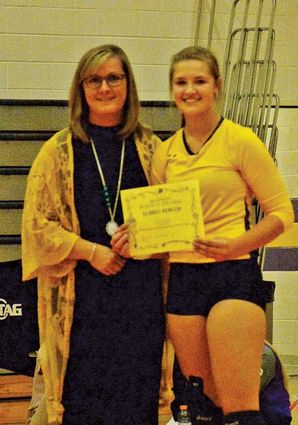 Every week, MaxPreps, a division of the CBS corporation, chooses high school athletes from all 50 states to highlight in various sports. For volleyball, that decision is made in cooperation with the American Volleyball Coaches Association (AVCA). Both MaxPreps and the AVCA, when it came to choosing Wyoming's Player of the Week, chose Saratoga Lady Panther Aubrey Berger as the Player of the Week for the week of Sept. 10.

"Aubrey is very deserving of it," said Shayley Love, head coach of the Lady Panthers, "she's starting to come around as an all-around player. In the past, we all knew she could hit, but now her serving, her passing–all of that is–starting to come together."

Love first became aware of Berger being awarded Player of the Week when she logged on Thursday evening to enter scores from the game against the Hanna, Elk Mountain and Medicine Bow Lady Miners. That night, Love called Berger and let her know about the award.

"I asked her a few more times if she was serious about it," said Berger of Love's call. "It was a huge shock, especially out of all the 1A, 2A, 3A, 4A people. I couldn't actually believe it."

"Aubrey has just been playing very well and very solid this season," Love said. "We talked about how strong she was earlier on and she just continues to prove that. As our season is going on, she's starting to get smarter–along with that strength."

So far this year, across 12 games played, Berger has had 33 kills, 44 digs, 11 aces and four blocks. Berger credits much of her being awarded Wyoming Player of the Week to her family and her coach.

"Volleyball–wise, my mom and my sister. Dixie for sure and, obviously, my coach," Berger said.

Before the varsity game against Encampment on Saturday and the Pledge of Allegiance, Saratoga Middle/High School held a quick, impromptu ceremony to recognize Berger for the accomplishment. Love presented Berger with a certificate for being MaxPreps' and AVCA's Wyoming Player of the Week. While unexpected for Berger, the junior did not seem embarrassed for the extra attention paid her preceding the match against the Encampment Lady Tigers.