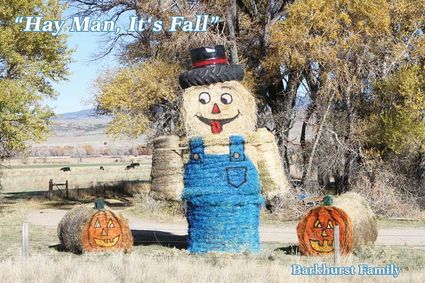 Last year's hay bale sculpture winner was this entry from the Barkhurst family.

For the second year in a row, Valley residents can expect to see hay bale sculptures standing in fields thanks to the Platte Valley Arts Council (PVAC). In a recent press release, the PVAC announced it was sponsoring the second annual Hay Bale Sculpture Contest.

"All ranches, business or families are invited to show off some good old ranch ingenuity that gives their outfit creative bragging rights," stated the press release. "The rules state that sculptures may incorporate wood, metal, wire, paint, canvas dams or anything else dreamed up, but must predominately be made of hay."

Entry forms are due by Oct. 1 and photos of constructed masterpieces will be posted on the PVAC Facebook page at www.facebook.com/PlatteValleyArts where the contest will run from Oct. 16 through Oct. 31, 2018. The winner of the contest will be the one with the most "likes" on the Facebook page.

The PVAC stated in their press release that, along with promoting awareness of all the ranching operations in Encampment, Saratoga and Riverside, the PVAC hopes to "share the creative agricultural minds in our midst." The "People's Choice" winner will take home a traveling trophy created by Saratoga artist Sierra Smith. The trophy is currently held by the Barkhurst family, who won People's Choice last year.

Sculpture must be predominately be made of hay (round or square bales, loose hay), other materials may be added (wood, metal, wire, paint, cloth, etc.).

Sculptures should be constructed and visible near a highway or county road.

You need not be a rancher to enter, you just need your own hay and materials and a place to display

You do not need to be a member of the Platte Valley Arts Council to enter.

Photos of hay bale sculptures will be posted on the Platte Valley Arts Council Facebook page, and a tally of votes placed on that page will determine the winners.

The winner will be entitled to keep the traveling trophy for one year and then will surrender the trophy for the following year's judging.