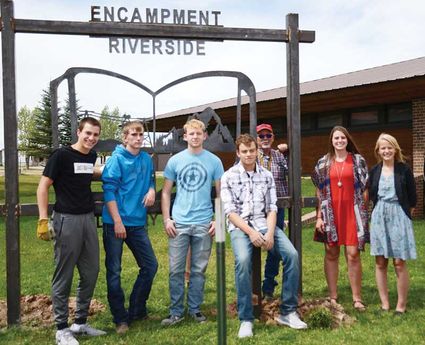 Encampment residents driving down Rankin Street may have noticed some recent changes at the Encampment/Riverside Branch Library signaling the sign of the times. The former sign for the branch of the Carbon County Library System (CCLS), which was low to the ground and difficult to see, has been replaced by one that will be fairly easy to spot.

"The old sign has been rebuilt many times and we've struggled to replace it," said Dawna Martin, Encampment/Riverside Library branch manager. "Finally the Encampment Friends (of the Library) took it upon themselves find a solution."

That solution, according to Encampment FOL member Nancy Lynch, was to speak with Clint Bromley, who teaches Vocational-Agriculture at Encampment K-12 Schools, about constructing a new sign for the library.

"They were more than willing," said Lynch, "we just had to present our pattern that we wanted." 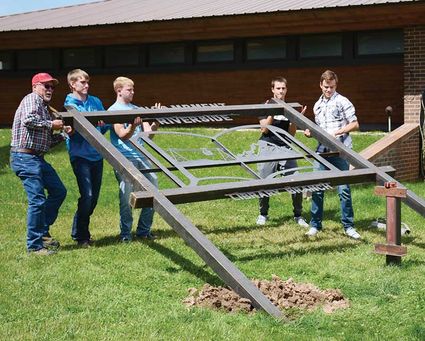 The pattern is similar to that of the Carbon County Library System, an open book, but includes elements of the area in its "pages." On one page, aerial tramways that recall Encampment's history as a copper mining town and, on the other, a mountain complete with silhouettes of pine trees.

While the sign was technically completed last year, it wasn't until this school year Bromley and his students were able to take the time to erect the sign outside the library. On the sunny, yet windy, afternoon of Aug. 30, that's just what they did. The vo-ag teacher and a handful of students guided the sign into pre-dug holes and filled them with sakrete.

Wire was then strung from the sign to two fence posts to provide stability for the sign as the sakrete set. During all of this, Ron Beitel showed up with a skid-steer to remove the old wood sign that had stood outside the branch library since its opening.

The next step for the Encampment FOL is to paint the sign in colors similar to the CCLS logo.