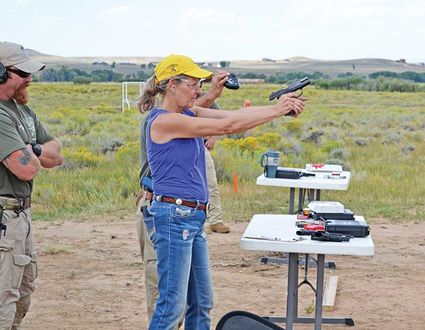 John Russo and other professional gun trainers will be at the Spur Outfitters pistol range starting August 18 to teach the fifth annual Advanced Defensive Pistol course.

In the past, students with skill levels ranging from never having fired a gun to fairly proficient have attended the course in the proper defensive use of a semi-automatic pistol.

The 3-hour course begins with a classroom-style general overview that goes from parts and controls of a pistol to proper aiming, stance and trigger pull.

After the classroom instruction, attendees take a step outside to the range at the base of Baggot Rocks for some practice.

Range practice usually begins with various iterations of target practice while instructors check stance and aim. The day ends with students firing a full magazine at a steel target in a timed event.

Russo has an extensive background in law enforcement and has served for almost 25 years in various areas at Southern California police departments doing everything from general patrol work to training SWAT snipers.

Russo originally came to the Spur for a writer's event after he began writing for gun magazines. He was invited to come up by gun manufacturers who want writers to test and write about new weapons. During this event Russo got to know Spur Outfitters manager Dave Sturm, who found out about Russo's firearms training experience and asked him to come train the Spur staff. 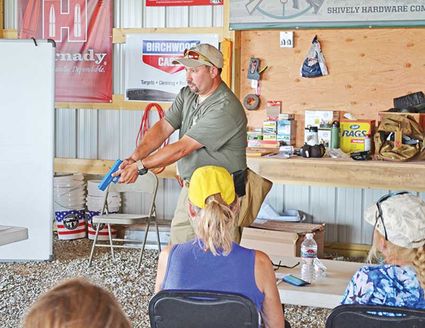 Russo has been coming to the Spur to teach firearms courses for four years. Though the original intent was to train Spur personnel, it was eventually decided to open the training to the public. Russo stresses that he would like to see more kids come take the course as he feels that kids are much safer when properly trained.

Weapons and ammunition are provided, but students may bring their own weapons if they would like to be trained with those.

Cost for the course is $50 per session. For more information, a schedule or to sign up for the remaining classes, call Corina at Spur Outfitters 307-327-6505 or email [email protected].