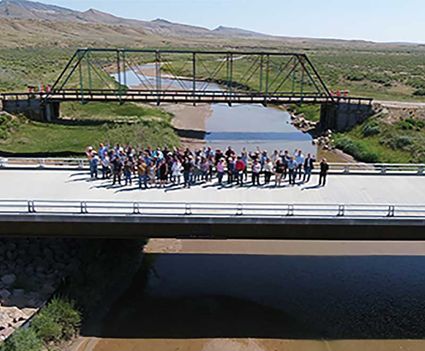 A drone's eye view of the Ekola bridge and those at the bridge's dedication.

There was a lot of traffic on County Road 121 around 10 a.m. on July 31 as dozens of people made their way to the Rocky Mountain Power Ekola Bridge and County Road 121 dedication.

Both Carbon County and Rocky Mountain Power officials gathered to commemorate the completion of the new Ekola bridge, as well as the resurfacing of 10 miles of County Road 121 in Carbon County.

Meyer said Rocky Mountain Power was proud to be there and she personally was happy with the large crowd for the dedication.

"It is a beautiful chamber of commerce day, the turnout was wonderful and only in Wyoming would people drive this distance to get to a place like this for a ceremony like we had," Meyer said smiling.

According to a Rocky Mountain Power press release for the event, "Energy Vision 2020 adds three new wind projects in Wyoming that will provide a total 1,150 MW of new wind energy capacity. It also includes a new 140-mile high-voltage transmission line and the re-powering of the company's existing wind fleet with longer blades and newer technology that will boost output by more than 25 percent and extend the life of the wind turbines."

Meyer was the introductory speaker for the ceremony that was held in a large tent with the new bridge and road in the backdrop.

"This is an exciting initiative that will significantly expand the company's Wyoming wind fleet and benefit both state and local economies," Crane said. "We look forward to the benefits the projects will bring to all our customers in the form of low-cost renewable energy and a more robust transmission system."

She said the dedication was exciting because it was the first "dirt turning project" of the Energy Vision 2020 program. Crane said the project would not have happened if Rocky Mountain Power had not been working the past 11 years getting permits for the Gateway West and Gateway South transmission programs for Bureau Land Management (BLM) and Federal permitting.

"We finished that in the first quarter of this year, we got our very last permits on transmission and that enabled us to be able to do these projects, plus add the transmission because we are transmission constrained in this area already and so we needed that new transmission before we could put up more wind facilities in Carbon County."

When Chad Teply, Rocky Mountain Power Senior Vice President of Strategy and Development, spoke he said he was often asked why it was this year the bridge was built when much of the construction would be taking place next year.

"Without that bridge and road being done this season, we wouldn't be in the position to start construction next season," Teply said. "We also understand, in projects like this, there is a significant responsibility on behalf of Rocky Mountain Power to not only deliver the project (transmission) to our customers, but to recognize the support and impact, not only to the state and county, but also the landowners which we will be working with so we can make projects (bridge and road) like this happen."

He thanked Bill Nation and his team from Carbon County Road and Bridge for all their hard work. Teply thanked the construction firm Oftedal for what they accomplished.

John Johnson, Carbon County Commissioner chairman, said a lot of time had been invested by the Carbon County commissioners and Carbon Clerk, Gwynn Bartlett. Johnson added he was happy to see the bridge get completed.

"So when we finally get to see some stirring up dirt, this is a good thing, because we see something is going to happen and it is going to be a boon for Carbon County," Johnson said.

Johnson thanked the town of Medicine Bow for it's hospitality to the construction workers.

"The town always made sure there was a place open for them to be fed," Johnson said.

Nancy Anderson, historian for Carbon County spoke about the bridge from times past.

This explains why remnants of boats can be found she said.

"So if you go by some of these old homesteads long abandoned out here, you can see remnants of a boat or an oar and go why in the world would they have a boat here, this is why," Anderson explained.

She said the Ekola family that settled the area would be happy to see the bridge.

"I think they would be very happy to have this bridge and project named after them," Anderson concluded.

Meyer closed the dedication and thanked everyone for coming. 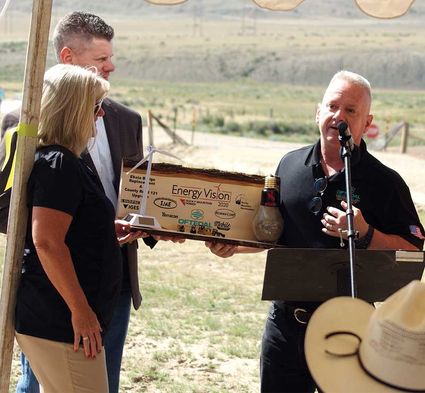 "Some companies come to Carbon County and see open land and opportunity," Meyer said. "We see the people that live here, we see families, we see history, we see wildlife and a way of life."

George Hruska, Oftedal Construction Business Development Director, presented Crane with the shovel that turned over the first dirt and the actual first dirt.

After the ceremony, all the attendees went to the bridge for the ribbon cutting ceremony and a picture by a drone Rocky Mountain Power had brought.

As the attendees departed a minor traffic jam (at least by County Road 121 standards) occurred although cars and trucks kept their distance to keep broken windshields at bay.

Anderson said, as she was leaving, she was amazed at how many local residents came to the ceremony.

"It was grand to see so many locals come to this opening," Anderson said. "Simply grand."