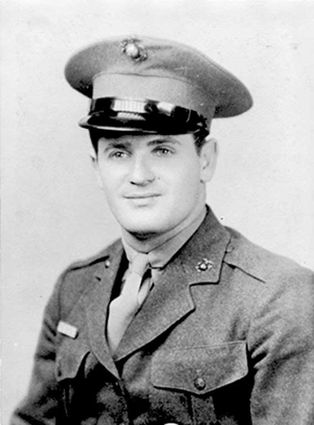 Homer Wesley Beach Sr. was born in Felicity Ohio, to Edwin and Gladys Beach, April 13th, 1922. He attended school in New Richmond where he learned an appreciation of the outdoors through hunting and fishing along the Ohio River that he later passed along to much of his family.

By the time Homer was in high school the Second World War was in full swing. Feeling a strong sense of duty, (like so many at that time) he joined the Marine Corp, graduating from Paris Island, South Carolina in 1942. From there he trained in Dunedin, Florida to become a "Buffalo" amphibious vehicle driver in the 3rd Marine Division. The then 20-year-old corporal found himself driving assault troops ashore on Guam, Guadalcanal and Iwo Jima through the remainder of WWII. In recounting the battle at Iwo Jima many years later he said ... After ferrying two loads of Leathernecks ashore he found himself ordered to sit at the base of Mount Suribachi watching as his fellow Marines carried the American flag up the mountain. It took the boys several tries but when the flag finally went up .... they all started cheering. The ships on the beach were ringing their bells and blowing their whistles ... he said this was only day four of a fight that would go on for another month in order to win control of Iwo Jima. Homer remained in active service from July 11th, 1942 until July 13th 1946.

Once out of the service and back in the states, Homer trained to be an electrician. Soon thereafter he met, fell in love with, and married Rosie Marie Stansell. The couple had three sons, Homer Wesley Jr., Donald Lee and Jeffrey Wayne who they raised together in the small town of Bethel, Ohio. Sadly in 1982 after a move to Wyoming, Rosie was diagnosed with cancer and passed away. Homer Sr. later relocated to Florida, where he resided until his death February 13th, 2018. He was just a few weeks shy of his 96th birthday. He is survived by his three sons and their wives, Donna, Carol and Anna. Homer Sr. had seven grandchildren, Wesley, Doug, Daniel, Carl, Elizabeth, Scott and Melissa. (Doug and Scott having preceded him in death.) He is also survived by his eleven great grandchildren ... Kayla, Celeste, Brandon, Riley, Kira, Haley, Corbin, Tessa, Creighton, Dawson and Barrett.

Dad came from the "Make Do" generation, where things weren't thrown out nor did they wear out. They just took a while to repair! With a twinkle in his eye, he taught us it's okay to tease one another and that a bad day fishing beats a good day at work any day of the week!