A stop on the Journey 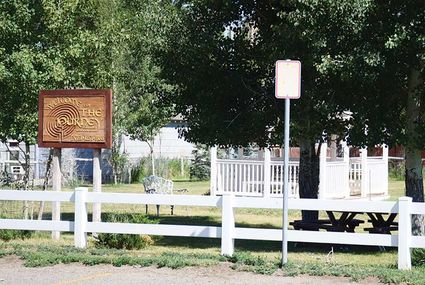 The aptly named "The Journey" serves as a camping spot for cross-country bicyclists over the summer.

As the summer has progressed, one of the constants throughout Wyoming is the sight of cyclists traveling alongside the roads. Since WYO 130 cuts through Saratoga, the town is often an obvious stop for those who are often taking part in cross-country rides. Valley residents may have noticed, however, that many cyclists have gathered at St. Barnabas Episcopal Church which sits along WYO 130, and there's a good reason why.

Reverend Susan Dyer has put the church on the international cycling website Warm Showers, which serves as a way for people to serve as hosts to cyclists and for cyclists to find these potential hosts.

"For most of the people that get ahold of us, they go through Warm Showers," said Dyer.

The rear lawn of St. Barnabas Church, which sits across the street from the post office, has been offered by Dyer as a place for cyclists to rest for the night. During their stay, the weary travelers will venture down to the hot springs where they will take a shower. Some of them, if they feel up to it, will even head out to one of the multiple restaurants that Saratoga has to offer.

According to Dyer, the cyclists love Saratoga due to the warm receptions they often get and how people will go out of their way to help them.

"One of the independent guys had broken his bike and he went over to NAPA and they sent him over to a machinist. He went up there and this guy welded it for him and didn't charge him," Dyer said.

It was not until recently, however, that Dyer began to allow groups of cyclists to stay at the church instead of just a few at a time. Adventure Cycling, a nonprofit started in 1973 and based in Missoula, Mont., called Dyer up and asked her if she would be willing to accommodate groups of cyclists they sponsored. Hesitant at first, Dyer said that the cooperation between her and Adventure Cycling has worked out well.

The lawn of the church has played host to groups as large as 27 and as small as six. Dyer said that over 50 cyclists have camped out on the church lawn so far this summer. The most recent group to camp arrived on July 10.

Starting in Virginia and heading to Oregon, the group was on the downhill side of their travels and were happy to arrive in Saratoga.

"This part of the country is really beautiful," said Todd Smith, a co-leader of the trip. "This is kind of the payoff for getting through some of the rougher spots like Kansas."

This trip was Smith's first as a leader of a trans-American tour, but he has been involved for several years. Smith, who lives in Pennsylvania, said he had a plan when he was a kid to ride his bike to the beaches of Maryland. The ride never happened, but Smith felt motivated again in college to attempt another ride.

"Years later, I was going to graduate school out in Los Angeles and I decided I would do a cross-country trip. Just kind of hopped on the bike and did it," Smith said.

Zoe Smoak, the other co-leader, lives in South Carolina and has also been taking part in cross-country cycling for several years.

"When my children were small, we always went to the laundromat and played games and we met this guy, he kept inviting us on club rides and we eventually tried it out. Then we had a friend there and he always wanted to go cross country," said Smoak.

Unfortunately, that friend fell ill and eventually passed away. It was then that Smoak and her husband, Ronnie, decided they needed to take the opportunity while it was there. Both Smoak and Smith spoke highly of Adventure Cycling, stating that it was a great company for people who were just starting out with cycling and were unsure if it was for them.

Aside from offering guided cross-country tours, the nonprofit company also offers shorter guided tours that last anywhere from a couple days to a week. Adventure Cycling also trains other, more experienced, cyclists on how to guide tours.

The morning of July 11, the cyclists from Virginia started on their way once again after a night's rest at St. Barnabas. Dyer, who has yet to have had a bad experience with any of the cyclists that have camped out on the lawn, will continue to provide a place of rest for those biking throughout and over the United States and North America.

"My son backpacked through Europe one year and he wrote to me. He said 'Mom, that is a wonderful ministry that you're doing because most people don't often think about doing it,'" said Dyer.