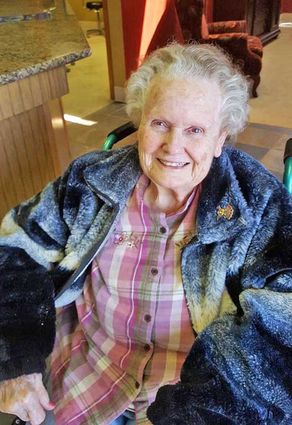 Vera Juanita (Hunt) Brinkman returned to her savior on December 16, 2017. She was born on January 13, 1927 in Coffeyville, Kansas to Bertha and Roy Hunt. She grew up on a dairy farm where she enjoyed milking and selling eggs.

After she graduated from high school she went to nursing training and became a cadet nurse in World War II. On July 29, 1946 she married H. Donald Brinkman. They were blessed with a son, Donald Roy Brinkman, April 16, 1947. The family remained in Coffeyville until 1951 when they moved to Sinclair.

Vera worked as a nurse's aid at the Carbon County Memorial Hospital. She was a salesperson for many businesses in Rawlins, Gambles, Anthony's, and Build Rite. She also sold Avon and was a Weight Watchers leader. She enjoyed coin collecting, square dancing and snowmobiling.

They lived in Rawlins until 1986 when they retired to the cabin they built in Ryan Park. They enjoyed snowmobiling and all the activities the Platte Valley had to offer.

Vera was preceded in death by her husband, her mother and father and sisters, Berta and Joy.

There will be a celebration of Vera's life July 29 when her ashes will join her beloved husband's ashes in Ryan Park at 13 Mule Deer Road. The celebration will be at 11 a.m. with a luncheon at the Ryan Park Fire House.