From April Fools to Friday the 13th 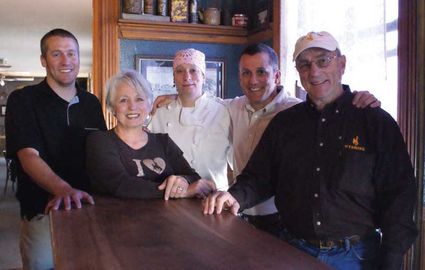 Saratoga Sun file photo The owners/operators of the Wolf Hotel for 41 years. The Campbells are, from left, son Judd, mother Kathleen, daughter Kirsten, son Jason and father Doug. Kirsten departed several years ago but her spirit is still part of the Wolf Hotel. The other Campbell daughter, Meghan, was not on hand for this photo.

Doug and Kathleen Campbell often joke about the fact that they bought the Hotel Wolf on April Fools Day. Obviously not superstitious, they are celebrating the hotel's 125 anniversary on Friday the 13th. The Campbell family has been the proprietors of this immensely popular establishment for 41 years.

For any person that comes to Saratoga and doesn't know this historical landmark, the Hotel Wolf is an L-shaped, two and one-half story, brick and frame building on the corner of Bridge Ave. and First St.

The building has a steeply-gabled roof with dormers and many rectangular windows. The Wolf...