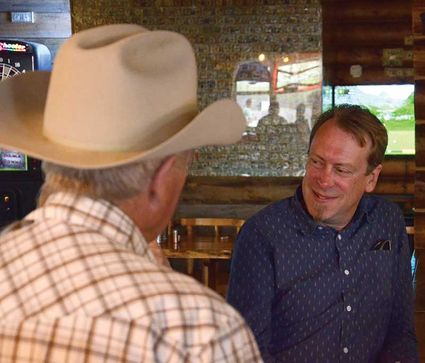 New GEM director Tim Nicklas visits during a meet and greet held for him May 15 at Bear Trap Cafe and Bar.

The Grand Encampment Museum (GEM) in Encampment, Wyo. recently bid farewell to former director Christy Smith as she departed the Valley for new adventures in history in Cheyenne. Before she left, however, she made sure that the GEM's new director, Tim Nicklas, was well-taken care of as he prepared to take on a new adventure himself.

"I would probably be drowning right now if it weren't for Cristy. She left that museum in such impeccable shape and when I came on board, she really took me by the hand," said Nicklas. "We owe her so much. I can tell you, that's not usually the case. Usually the...