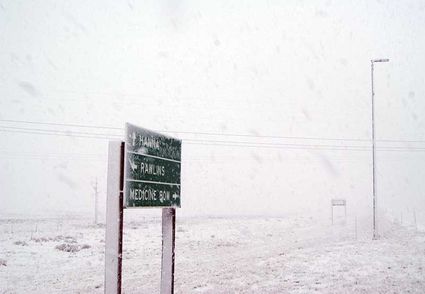 A serene winterscape just outside of Hanna on WYO 130.

It is no secret I have lived in a fair amount of places in my life, but I really don't think I have ever lived an area that can have such different weather that is less than 40 miles apart. This includes going from coastal/tropical environments and traveling inland to nearby mountains that are higher than what we have in the Snowy Range.

Hanna, Elk Mountain and Medicine Bow in the north of the county often have very different weather than what is in the Valley.

This was driven home about a month ago when I tried to come to work in the morning after an unexpected snow storm hit the town of Hanna. My poor Honda (also known as the "Deer Hunter" for all the animals it has taken out in the past few years) started up a hill about two miles out of town. The snow kept getting worse as I drove up the slope towards Saratoga.

My car made it clear it wasn't going up by spinning its wheels and going nowhere halfway up the hill.

I had to turn around and call Keith McLendon (the editor and my boss) to tell him the snow was coming down too hard to continue. I might also add, when I started up the road, it was before 9 a.m.

At 7 a.m. I had been outside and there was nary a snowflake. In less than two hours a blizzard of sorts had hit the town.

When I talked to Keith, he told me there was no snow in Saratoga, but he had some papers he needed to drop off. Long story short, he appeared at my door about an hour later. It was still snowing. He told me it had been smooth sailing for him until he was about six miles outside of Hanna. Then he found himself slowing down to around 20 miles per hour because the snow was wet and heavy. Keith even said he lost a little control even at that speed because the roads were so slick. He had driven an all wheel drive vehicle.

"It is like you live in another country today," he said as he dropped off the papers.

He wasn't saying anything I had not felt before. Winter weather in Carbon County can be extreme at one place and not bad in another area.

It isn't just the snow, but the wind.

There is a reason there are windmill farms sprouting up in the area. It is almost a given, the wind howling in Hanna and Medicine Bow won't even be noticed in Saratoga one day and then another day a storm in the Valley is producing rain, hail and Hanna will be dry.

Ryan Park is another place I have seen extreme weather versus the Valley. I have driven out to Ryan Park for a story to see several feet of snow on the ground nearing that town where there was no trace of snow in Saratoga.

Then there is Arlington and Elk Mountain. Both those places have made me regret I was out and about in the weather these places were throwing at me. I have actually broken into a cold sweat trying to navigate US 72 in a snowstorm from Elk Mountain to Hanna. I think the normal 15 minute drive took almost an hour.

The extremes of what weather is like in one part of this county versus another never ceases to amaze me. Then there are the days where every community is getting the same bad weather and you just have to stay inside and attempt no trips.

However the struggle I have had with the roads to get back and forth between the communities; I feel like a wuss crying about my difficulty-especially when I think of the first people who settled this county.

Joshua Wood lent me a book on the town of Carbon a couple weeks back which I read pretty fast considering its thickness and years covered. I was going to Victor Anderson's celebration of life at Carbon Cemetery and I wanted to have a handle on what the town had been at one time.

The pictures from the 1880's showed a town with more buildings than I ever imagined. I know the railroad ran through town, but I can't help but marvel how they built the town in the middle of nowhere and kept it open for the years it was alive.

For those who don't know why it dried up, Union Pacific wanted a company town, which Carbon wasn't.

So Hanna was founded. Whole buildings were moved on logs to Hanna. When I think of the wind in northern Carbon County, even in summer, this would have been a task.

I have seen pictures of Saratoga and Grand Encampment from around the same time periods and sure enough, the topography is still different from the north, but the weather looked similarly insurmountable even with sleds.

It is hard to comprehend how people from Grand Encampment, Saratoga and Hanna stayed in contact during the early 1900s. I know there were small railroad towns every 19 miles until diesel took over coal, but still, it had to take a special type of person to make journeys between the communities during winter.

Hell, I bet it was tough all year long.

What did these extreme winters do to the trains and roads? How did the first settlers that traveled between the communities do it? I can barely cope and it is way easier now to get around in winter.

It really says so much about the character of the people that were able to prosper under the adversity of carving out a life here.

Donna Pipher gave me material to read that took place in the 1940s and 50s and again, I am amazed at how people moved here and survived. No doubt it was better than in the 1880s but as I read of the winters and how people coped, I knew again it took a special breed to live in Carbon County at this time.

This was a 12-page weekly supplement coming out on Wednesdays, from the Rawlins Daily Times and it had reporters based in Hanna, McFadden-Arlington, Shirley Basin and Elk Mountain for the paper.

The papers I read came from the early to mid seventies during a mining boom and it was apparent going between the communities was easier than the 50s, but Snow Chi Minh Trail was only a couple years old and different articles made it clear, it was still tough to get around in Carbon County.

I know snow tires were around then, as were snow plows, but four wheel drive was fairly non-existent. Plus how big were the cars back then?

Japanese cars were just starting to come and Volkswagen was truly the largest maker of small cars driven in the USA then. I don't know this for a fact, but I doubt there were a lot of Volkswagen Beetles or Karmann Ghias out on Carbon County roads. Especially in winter.

I have gone through the Saratoga Sun's back issues also from the same time period and besides not seeing any Volkswagens, it seems the challenge of getting around in winter was alive and well.

Again, I ask myself, how did these folks do it?

Sure, there was a highway to get to Rawlins or Laramie, but it wasn't the safest place to drive in snow storms during the 70s. Actually, I would say until the 2000s, Snow Chi Minh Trail was a challenge to drive as snow storms came in.

Give props to the people who kept it open. I will say it again, it takes a certain breed to go out in the blizzards that hit-much less work in them.

Here in 2018, Carbon County is still challenging to get around in winter, but WYDOT and community snow removal crews do an excellent job of getting things up and running even when large amounts of snow pile on the roads.

I see this firsthand many, many, many times on a yearly basis.

Trust me, I am enjoying the warm weather. I know soon enough, the beautiful drive I enjoy now will disappear and in its place will be a drive filled with apprehension.

There may be times I still won't be able to make it around to parts of the county, but one thing is a given.

I am always going to be impressed by the people that lived here generations before, that not only got around, but raised families, then raised kids of their own.

I think it boils down to a telling quote I read in Dick Perue's compilation entitled the Rich Heritage of Upper North Platte River Valley.

The weak died on the way,

Only the strong arrived,

They were the pioneers."