Looking back to the Lyre 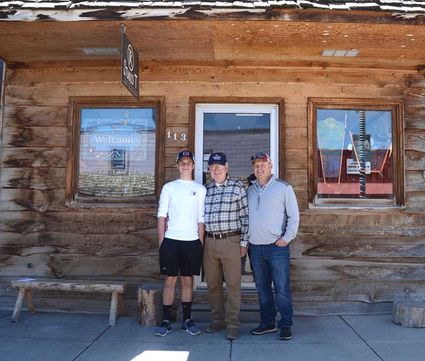 From left, on May 30 William Griffin Toole, William James Toole and William Timothy Toole stand in front of the former home of the Platte Valley Lyre, now home to Studio T Art Gallery.

On July 10, 1890 Gertrude Huntington became the first woman editor in the state of Wyoming shortly after she and her sister, Laura Huntington, had purchased the Platte Valley Lyre. Nearly 130 years after purchasing the paper, the Huntington Sisters' great-nephew, Dr. William James Toole, D.D. (Doctor of Divinity) stood in front of the former home of the Lyre, now Studio T, with his son and grandson for a photo.

During their visit to the Valley, the Toole family stayed in the recently renamed "Joe Pickett Room" at the Hotel Wolf before coming to the Saratoga Sun office on May 30. Dr. Toole,...