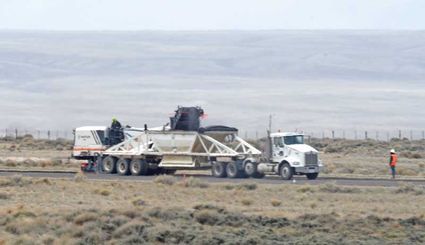 A rotomiller works to resurface the Shively Airfield runway Thursday.

"As early as January I mentioned we were having inquiries from 757s that wanted to come in. One of those was the one that was just in Cheyenne."

Robert "Bob" Maddox informed the Saratoga Airport Board during its regularly scheduled meeting at 1 p.m. on April 11 of the missed opportunity to land "Trump Force One," Donald Trump's private jet, at Shively Airfield in late March. As was reported in the Wyoming Tribune Eagle, the plane landed in Cheyenne while Jared Kushner and Ivanka Trump vacationed in Saratoga.

"It was a missed opportunity. It would certainly have been nice business for us, but it was a million dollars, two million dollars of free advertising for the town of Saratoga to have that big billboard sitting at the end of the runway for eight days," said Maddox.

According to Maddox, Saratoga Jet Center had been working with Trump's personal pilot, John Dunkin, for several months to try and accommodate the Boeing aircraft. As was reported in the Jan. 31 edition of the Saratoga Sun, the runway at Shively Airfield can land these large jets. Special measures must be taken, however, to protect the tarmac and the taxiways due to the weight of the aircraft.

Dunkin, after talking with Maddox as well as Dave Schultz of Sage Civil Engineering, made the final decision to land at Cheyenne Regional Airport. During the airport board meeting, Schultz insisted that while Shivey Airfield has been able to land 757s in the past, this particular one may have been far too heavy to have been received by the municipal airport according to a document provided by Boeing.

"In my opinion, if you were to look at that document, that 757 way exceeds the maximum amount that you want to land here," said Schultz.

The conversation about the "missed opportunity" to land the Trump jet led to a discussion about the pavement classification number (PCN), used by the Federal Aviation Administration (FAA), for Shively Airfield and Maddox's concern that the number will go down following the resurfacing currently taking place. The PCN for Shively Airfield is currently listed as 50 F/D/X/U.

Schultz explained to the board and those gathered at the meeting who were unfamiliar with the PCN that the number, ranging from one to 130, was determined by the letters that followed it. In the case of Shively Airfield, the number of 50 was reached because of the flexible pavement, the ultra low subgrade strength, the high allowable tire pressure and the method used to determine the PCN - aircraft.

According to Schultz, however, that number was not determined by anyone at Sage Civil Engineering nor is there any documentation to confirm how that number was reached. Maddox told Schultz and the board that, despite how the current number was calculated, his concern was the number dropping and the airfield losing the business of aircraft that regularly lands there.

The board also discussed what to do with the rotomilling that was currently being generated from the removal of the asphalt on the runway. New board member Ellie Dana asked what uses there were for the millings.

"Is it something a hangar owner could use?" asked Arlen Hughes, member of the airport board.

Schultz confirmed it could be placed around the hangars to reduce dust as well as the growth of weeds. Richard Raymer, town council member and the council's representative on the airport board, added that if the rotomillings were to be placed around any of the hangars that the public works department would need to be the ones to do it due to liability issues. Raymer added that the rotomillings could not be sold to any private entities or individuals.

"Just like when we took material out of the river, the contractor that came in and did that would have taken that material in trade for the expense other than we couldn't do it. We can transfer that to another government entity, but because of federal money, state money and town money we cannot sell it," said Raymer. "Can't sell it, can't give it away."

In other business, the board welcomed their newest member. Introducing herself, Dana told the board and those gathered that she was a private pilot as well as the squadron leader for the Commemorative Air Force. Dana has flown aircraft ranging from a Cessna Citation, a private business jet, to an F-100 Super Sabre, a supersonic jet used by the United States Air Force between 1954 and 1971. Board members and hangar owners welcomed both Dana and her expertise.

David Worthington, a hangar owner at Shively Airfield, asked Lance Grubb, chairman of the airport board, if it was possible for the board to meet at another time. Worthington explained he felt 1 p.m. was inconvenient for most people as they were either unable to make it or had to take time off of work. Grubb told Worthington that it wasn't convenient for many of the board members, either, adding that they also had to take time out of their day to attend. According to Grubb, however, the 1 p.m. meeting time had proven to be the only way they could obtain a quorum and conduct business.

With no other business to conduct, the airport board adjourned. The next regularly scheduled airport board meeting will be held at 1 p.m. on May 9 at the Saratoga Town Hall.