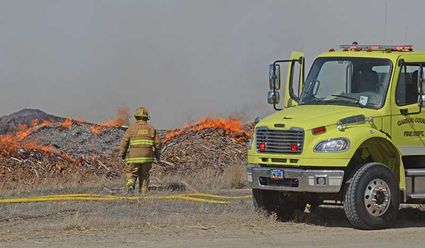 At approximately 2:30 p.m. on Monday, April 16, the Saratoga Volunteer Fire Department (SVFD) received a call of a fire at Saratoga Forest Management lumber mill. According to reports, smoke was spotted coming from piles of sawdust at the mill as early as noon.

Within minutes of arriving on the scene, SVFD requested dispatch to call both Encampment Volunteer Fire Department (EVFD) and Ryan Park Fire Department (RPFD) to the scene as well. As the fire spread and smoke filled the skies, town residents made their way to Saratoga Inn Overlook subdivision.

As employees of the mill attempted to quench the fire with hoses and fire extinguishers, the screech of sirens pierced through the roar of the Wyoming wind which continued to exacerbate the flames. Carbon County Fire Department (CCFD), along with EVFD and RPFD, came onto the scene rapidly while the Carbon County Sheriff's Office, Highway Patrol and Saratoga Police Department established perimeters.

While it seemed at times as if the fire might be under control at times, the prevailing wind coming from the west did nothing to help responders and continued to stoke the flames. With high winds present, the fire jumped from one pile of wood chips to another before engulfing stacks of timber. By 4 p.m., as the situation was declared a "Code Red," spectators at the Saratoga Inn Overlook were asked to leave the area as the flames and the smoke continued to climb.

According to Weather Underground, a commercial weather service, Saratoga had gusts up to 52 miles per hour (mph) with maximum wind speeds of 39 mph. The high winds provided additional frustrations for the fire departments attempting to contain the blaze.

Two hours after the initial call came in, the fire could be seen from Wyoming Highway 130 as the wind pushed the flames up the hill toward the cemetery. Businesses and private residences around Saratoga Forest Management were evacuated as the danger to the east side of Saratoga increased. County and local authorities worked on prohibiting access around the lumber mill as traffic became congested with people slowing down to look at the rapidly increasing inferno. 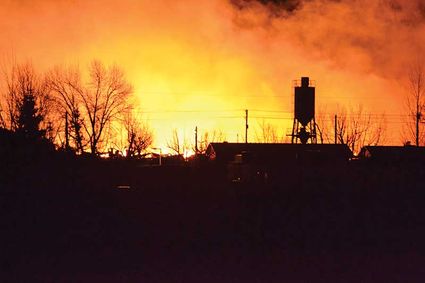 The fire raged throughout Monday night.

While the multiple fire departments dispatched to the scene continued to fight the blaze, local, county and state authorities swarmed in and out of town in an effort to shut down roads that were being used by residents to view the fire. Pic Pike Road, Southeast River Street, Carbon County Road 504 and 205 and Saratoga Lake road all had access restricted to them. Smoke from the fire could be seen as far away as Walcott and flames were visible to drivers descending into the Valley.

By 7 p.m. high winds that had been plaguing the fire crews died down and smoke began to disappear. As of Monday night, weather forecasts for the following day called for a 50 percent chance of rain with a possibility of turning to snow showers in the afternoon. As the temperature dropped and the sun began to set, authorities started to open the roads that had been closed earlier that day.

During a press conference held at 11:30 a.m. on Tuesday at the Saratoga Town Hall, Mayor Ed Glode declared the situation an emergency but informed the public that the fire was 100 percent contained and had burned 45-50 acres.