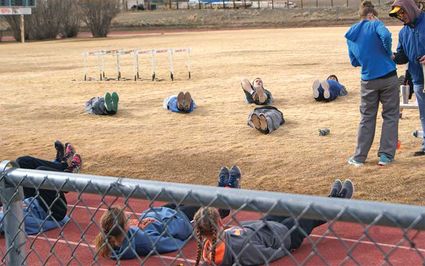 Photos by Mike Armstrong The HEM track team warms up for practice Wednesday.

Jackie Jones, head coach of Hanna, Elk Mountain, Medicine Bow (HEM) track team was happy about their first outing at the Wind River High School Invitational where the Miners took fourth place as a team for boys and girls.

"We had several performances on Saturday," Jones said. "Conor McGraw, Taylar Scott and Amy Campbell all qualified for State in two individual events."

Jones said this was a great accomplishment for the first meet out and she was happy with other teammates of the State qualifiers.

"There were several others who placed high in events and scored team points," Jones said. "Jessica Nelsen worked hard to win the 800 against a food field of runners."

She also had praise for Taylor Widdison.

"Taylor, showed he will contribute for the boys team," Jones said. "He finished second in the 800 and fourth in the 1600."

Shane McGraw also had an excellent day coming in third in the 200 meter, first in the 400 meter, fifth in the boys long jump, fourth in the triple jump.

Tylor Goodro and Kyle Solaas both scored points in their events for the team.

"This was a great meet to hit the ground running, and the beautiful weather made us happy as well."

The HEM Miners next meet is scheduled on March 23 at Big Piney, but Jones said if weather does not permit travel to this meet, the team will consider going to Casper for a meet scheduled on that date.