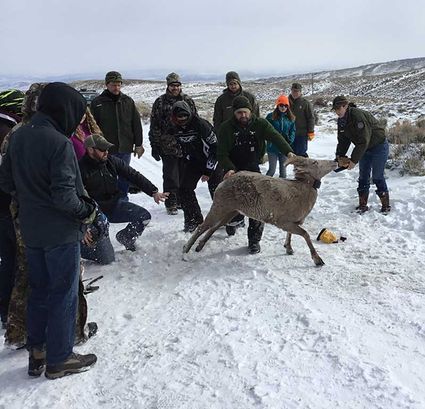 One of the five collared bighorn sheep ewes begins its escape after being released.

"It is hard to describe the feeling of watching the chopper thundering in with sheep dangling below and setting them a stone's-throw distance from us, blasting us with rotor-wash before taking off for another capture."

Jordan Seitz, who teaches sixth grade at Encampment K12 Schools and eighth grade earth science, was able to take his students on a "once-in-a-lifetime experience" on Feb. 28. Seitz, his students and some additional staff members from Encampment aided the Wyoming Game and Fish Department (WGFD) in their capture of five bighorn sheep ewes.

The WGFD had intended to capture six e...