Airlifting ewes and a 'copter

Helicopter moving bighorn sheep fails, lands safely, has crew recovered and is itself lifted out 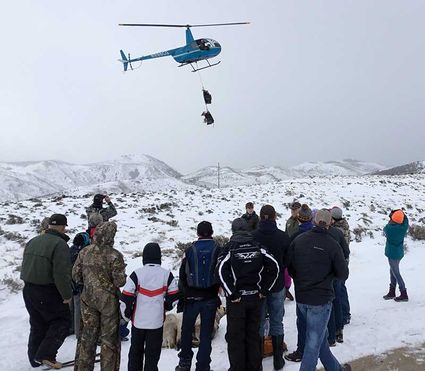 Photo courtesy of Will Schultz

Encampment K12 students watch as two bighorn sheep ewes are airlifted out of the Encampment River Valley as part of a WGFD disease surveillance project.

The Wyoming Game and Fish Department (WGFD) captured five bighorn sheep ewes from the Encampment River herd on Feb. 28 with the intention of capturing six for a statewide disease surveillance project. Mechanical problems, however, forced the helicopter being used by the WGFD to land in backcountry south of Encampment.

The crew of the helicopter were brought out on snowmobiles by Platte Valley Search and Rescue. Cory Nuhn, Colton Miller, Randy Grubert and Cody Miller were the PVSR personnel that were able to safely recover the crew.

The downed helicopter was retrieved the next day, March 1,...