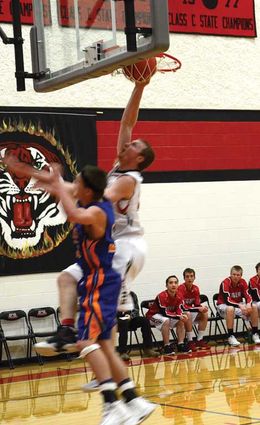 Wyatt Cox, playing his final home game, throws down a slam dunk against the HEM Miners. After the dunk, both the Encampment boys on the sidelines and Encampment fans in the stands would jump to their feet and cheer.

The Encampment Tigers had a week of wins as they hit the road for two games and hosted the Hanna, Elk Mountain and Medicine Bow (HEM) Miners for their final home game. Both the Tigers and the Lady Tigers were victorious against the Cheyenne South Bison JV on Feb. 6, HEM Miners on Friday and the Rock River Longhorns on Saturday.

Junior Noelle Peterson led the Lady Tigers in scoring during the last three games and, during the home game against the Miners, senior Wyatt Cox shocked the room with a slam dunk late in the third quarter.

Encampment girls traveled to Cheyenne to face off against the Lady Bison where they would win with an 8-point lead.

"We never really got anything going on the offensive end of this game," said Clint Bromley, head coach of the Lady Tigers, "but because our defense is working hard we were able to come out on top in this contest."

Friday the Lady Tigers hosted the Lady Miners for their final home game. Encampment would start the game with a 21-point run in the first quarter and end it with a 46-point lead and a running clock in the fourth quarter.

"Our low block players took control of this game from the start and we were able to control the boards 47-14," said Bromley.

Peterson scored 35 points and had 16 rebounds and 3 steals, Powell followed with 12 points, 12 rebounds, 8 assists, 2 steals and 5 blocks and Barkhurst with 6 points, 8 rebounds, 2 assists and 2 steals.

"This was a break-out game for Noelle Peterson and if she finishes the season this strong we should be competitive in every game we are in," said Bromley.

Bromley added that, as a team, the Lady Tigers were 11 for 14 from the free-throw line, something he was excited to see this point in the season.

Encampment girls took to the road, again, as they traveled to Rock River to take on the Lady Longhorns.

"This was a very competitive game for us against the best team in the East," said Bromley, "At times it looked like we were going to break the game open but Rock River would come back with a surge of their own to make it a close contest."

Peterson scored 29 points against the Lady Longhorns and had 13 rebounds while Powell followed with 12 points, 14 rebounds and 6 assists.

Bromley said that he believes that the Lady Longhorns will make a big splash in the East Regional and he looks forward to seeing them again at State.

Following the last three games, the Lady Tigers are 6-1 for conference and 18-1 for the season.

Leaving Tiger Nation to take on the Bison, Encampment boys would depart Cheyenne with a 28 point lead over the South JV.

For their final home game, the Tigers hosted HEM and sent the Miners packing with a 24-point deficit. 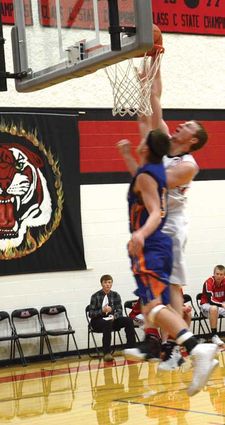 Wyatt Cox, playing his final home game, throws down a slam dunk against the HEM Miners. After the dunk, both the Encampment boys on the sidelines and Encampment fans in the stands would jump to their feet and cheer.

The highlight of the game was a slam dunk made by senior Wyatt Cox late in the third quarter following a turnover. The move, which brought Tiger Nation to its feet, added to an already emotional game with it being Cox's final home game.

The Encampment Tigers, so excited by Cox's dunk, were asked by the referees to return to their seats while Tiger fans roared with pride.

After their win against HEM, the Tigers traveled to Rock River. Encampment took down the Longhorns with a nearly 50-point lead by the end of the game and put a cap on their winning week.

Following the last three games, the Tigers are 3-4 for conference and 14-5 for the season.

Encampment Tigers and Lady Tigers will travel to Little Snake River Valley (LSRV) to take on the Rattlers and Lady Rattlers at noon on Feb. 17. This will be their final conference game before regionals.