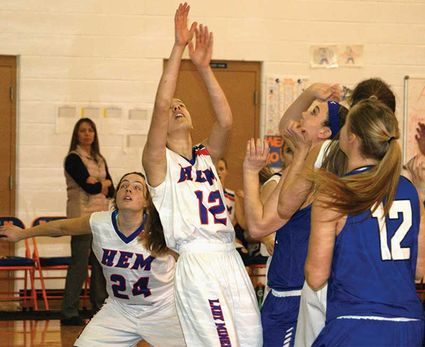 Amy Campbell puts up a shot against Rock River Saturday.

Hanna, Elk Mountain, Medicine Bow (HEM) high school girls basketball team faced Rock River on Saturday. The first half was close and it was a battle. Then the Lady Miners started to have the game get away from them the second half.

The score ended with the Lady Longhorns winning 41 to 27.

Coach Jackie Jones said she felt the first half, her players had done well.

"I think we did a really good job of holding their best players in check, but then the second half, those players started making plays and scoring."

Jones was happy with her team getting a few three pointers in the first half.