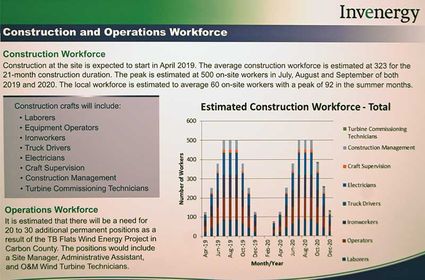 A graphic presented at Invenergy's open house showing employment numbers expected for the TB Flats energy project between April of 2019 and December of 2020.

Invernegy had an open house for residents of northern Carbon County from 3-7 p.m. on Thursday at the Medicine Bow Community Center. The company is headquartered in Chicago and is North America's largest independent renewable power generation company.

Krista Mann, Invenergy's director of renewable development, was at the open house to answer any questions or concerns the citizens of the surrounding area might have about the TB Flats wind energy project slated for construction in 2019.

"So since September when we had our open houses in Hanna and Medicine Bow, we have received official word t...