Average personal; income rises in Wyoming despite an overall reduction in payrolls thanks to oil and gas sector, wholesale trade growth. 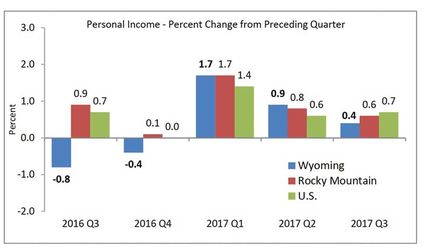 According to U.S. Government data, Wyoming's personal income is on the upswing. After several quarters of shrinking wages, the state joined every other in the U.S. in showing positive income growth.

Wyoming's average personal income saw modest growth in the third quarter of 2017 after two previous quarters of region-leading improvements, according to figures released by the U.S. Bureau of Labor Statistics (BEA) and Economic Analysis Division of the Wyoming Department of Administration and Information (EAD).

Wage growth over the last three quarters are a significant improvement for the state which saw steep declines in personal income throughout all of 2016 as the state slowly recovered from decreases in coal demand and soft oil prices.

Personal income is defined as income received from wages and salaries, property income from interest, dividends and rent, and certain government payments like social security, Medicare and Medicaid and unemployment benefits.

In the third quarter, personal income in Wyoming grew by $126 million. Earnings from employment were the lion's share of that, with $101 million in growth. Property income increased $14 million and government payments increased by $11 million.

Wyoming's slightly below average performance in the third quarter of 2017 was offset by strong growth in the previous two quarters of the fiscal year, however.

In the first quarter of 2017, Wyoming had a 1.7 percent increase in personal wages. That figure tied the Rocky Mountain region and surpassed the national average of 1.4 percent.

Nationwide, every state in the U.S. experienced personal income growth, indicating a robust job market. According to the BEA, Washington led the nation in income growth in the third quarter at 1.0 percent. South Dakota was last with 0.1 percent growth.

Much of the increase in personal income in Wyoming is attributable to oil and gas jobs, according to an analysis by EAD.

At the end of October, the state had about 2,200 more jobs in the mining sector-which includes oil and gas jobs-compared to the same month a year earlier. Despite the marked increase in employment in the oil and gas sectors, the overall number of payroll positions in the state decreased by 1,400 over the same period.

Despite there being fewer payroll positions in the state, the increase in jobs across the mining sector have pulled Wyoming's wages upward for the last three quarters, reversing 2016s trend of shrinking levels of personal income.

"The state saw growth in 17 of the 24 BEA-defined industries in the third quarter of 2017 with the mining sector, which includes oil and gas activities, having the largest impact on private earnings growth followed by wholesale trade" Jim Robinson, principal economist for the EAD said in a release.