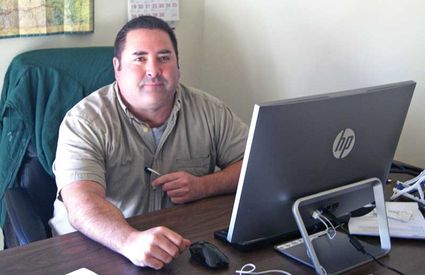 Jeff Brown started working in the health field when he was 19 as a nurse's aide. He knew early on in his life, what direction he wanted to pursue his professional vocation.

"I went to nursing school and from there, I held a LPN/RN position for 18 years in ER, ICU and flight nursing," Brown said. "I was a paramedic for 12 years alongside nursing, so I can say, I have been in health care for quite a while."

Brown was born and raised in Grand Forks, North Dakota and went to college at University of North Dakota.

"Science and health always held an interest for me and I worked in it all the time as I would go back to school to get more trained," Brown said.

For years he worked in health care in the state in which he grew up. Since he became a PA, he has worked family practice rural health and that side of medicine is what brought him to Wyoming in 2014.

Initially he came to work in Wyoming to work at the Glenrock clinic.

He and his family, wife Carmyn and two children, live is Casper. Brown stays in Medicine Bow during the week since he is at the clinic Tues-Thurs. He works in Casper sometimes when time allows.

"A physician assistant is able to see patients and diagnose, treat, write orders for anything like x-rays, lab work or specialty referrals," Brown said. "PAs are considered a mid-level position, similar to a nurse practitioner but we graduate with different philosophies, so to speak, with the nurse practitioner model kind of holistic, with the physician assistant being more medical model."

Brown said a PA has a supervising doctor whether or not the doctor is in the clinic every day or is seen only twice a month.

"My doc supervisor is Marvin Couch and he works out of Worland and Ft. Collins," Brown said. "Although he might be in Worland he is just minutes away by text or phone call and very available if I come into something I need advice."

The Medicine Bow clinic treats most patients that come in although there are cases that need for them to go to another medical facility.

"I like dealing with newborns especially to that 103 day time frame," Brown said. "There are so many things that can come up during that time and it is why I like the family practice aspect of this job."

Brown said he is like the family doctor of times gone by. He gets to know the patients and their needs.

"This clinic is capable of seeing any patient any age," Brown said. "We try hard to get people in on the day that call in."

Brown came to Medicine Bow Aug. 22 and he likes the town and people that he has met since arriving.

"I am dedicated to quality health care and I make a point to be easily approachable," Brown said. "I take the time to listen because it is really important when trying to find out what is going on."

He said he welcomes people from all the nearby communities on the four days he is open. There is a shortage of physician assistants for many rural communities in the U.S., so Medicine Bow residents have reason to be happy to have a PA with the commitment Brown has for the community.