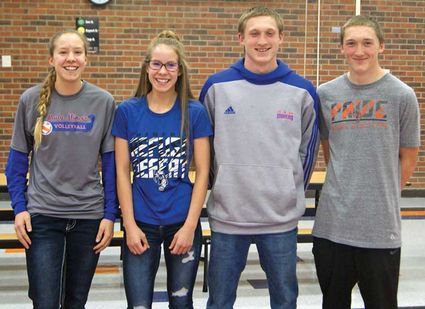 From left, Amy and Madison Campbell and Shane and Conor McGraw.

Amy and Madison (Maddy) Campbell are twins in the ninth grade at Hanna, Elk Mountain, Medicine Bow (HEM) Jr./Sr. High School. Shane and Conor McGraw are another set of twins at HEM in the 10th grade.

There are physical differences in both sets, but to be able to tell who is who, however, can be tricky for someone who doesn't know them well.

Amy is the oldest of the Campbell twins by 17 minutes. She is also a couple of inches taller than Maddy.

The girls admit they both have loved sports from a young age. In volleyball this year, the two girls, along with Taylor Scott, impressed many as a freshman group of athletes to watch. Amy might have gotten the most attention of the two sisters, but this didn't bother Maddy.

"It doesn't bother me at all, because I want to see her succeed," Maddy said.

"Its the other way around for me," Amy responded immediately.

Both girls said they want to help their teammates win games because it is a team effort.

"I feel when I am out on the court, I want to help the best I can," Amy said.

"I agree with her and I feel Amy pushes us all to do our very best," Maddy said.

The girls were not surprised at how well they did this year, but they give credit to Scott for being instrumental in their success.

"We consider ourselves 'the trio'," Amy said.

The twins said in unison they got interested in sports in fifth grade.

"We played against each other every once in a while, but we like being on the same team," Maddy said.

The girls said they have lived in Hanna all their lives and feel lucky to have the support from educators and coaches as they go through school. Both are straight A students.

"If you keep your grades up, you can play sports, so that is big part of it," Maddy said.

"I find sometimes being a twin makes us closer, although some days we would rather be known as just sisters instead of twins, but I can say we definitely have a lot in common," Maddy said.

"I would like to be an ER physician or surgeon, maybe even a veterinarian," Maddy said. "I really like helping people, giving advice and making their lives better."

The girls both said there are character traits the other admires about the other.

"Amy is confident, not scared to do many things," Maddy said.

"I feel Maddy is not scared to stand up for herself and if someone says something bad about her, she just brushes it off," Amy said.

The girls said they have not really tried to fool people over the years of who is who.

Maddy and Amy said coach Jackie Jones, who was their fifth and sixth grade teacher, has always pushed them to succeed whether in sports or their studies.

"Far as Amy and Maddy go, they want to be different and they are very individual, but they are there for each other," Jackie Jones said. "There were a couple times during the season where something might not be going well for one girl and the other sister was the first to pick the other up."

Jackie Jones said the Campbell twins and McGraw twins were similar in many ways.

Shane McGraw is five to seven minutes older than his twin brother, Conor. They have no other siblings and both agree they are good friends most of the time. This friendship is strengthened by playing sports for many years with each other.

"Our Dad tied a football to our hand at age two," Shane laughed.

"We started throwing the discus at four," Conor added.

The discus is something they still throw around, but it is not their focus in athletics the way it was when they were back in junior high.

"Our Dad jokes about that just as we got old enough to help on a ranch, we moved off," Shane said.

Going into junior high was when both feel their athleticism started to show.

"We've always been good at athletics, but I think it started in seventh grade when we started showing people what we could actually do," Conor said.

"Plus there was the Utah Jazz program earlier in grade school where we got to play around and that helped some," Shane said.

Track and football are the sports Conor leans towards playing making him a bit different from his brother.

Shane said he doesn't have a preference of sport.

"For me it is probably whichever is going on at the time," Shane said.

The boys agree they enjoy playing on the same team.

Both said they were happy with how the football season went. The team knew it was young.

"I think we did better than what we thought we would actually," Conor said. "The team stepped up as a whole. Everyone played better than I think was expected."

Tenth grade has its challenges over ninth grade because last year, the boys made names for themselves as freshmen.

"Now that people sort of know us, there is more pressure to see how well we can continue to do," Shane said.

"Shane is right. There is more pressure because you aren't just the freshman coming in, you now have experience and then you feel you have to step it up and go perform," Conor said.

The boys aren't nervous about playing teams that come in rated higher than HEM.

"Because we play a lot of small schools, they are in the same boat we are where you don't want injuries and play as best as you can with what you have," Shane said.

The McGraw twins have played jokes on people who are just starting to get to know them about who is who, but they realize it doesn't take long for people to figure out the difference.

They agree being a twin is beneficial.

"It is nice knowing there is somebody on the team that you can always go to and they know what you are talking about because they know you," Conor said. "If he has played that position, I can ask him about it and get his opinion."

The McGraw twins said any attention they get is because their teammates do such a good job supporting them.

Like the Campbell twins, both boys are good at academics.

"I probably could do more homework than I do, but we are both good students," Shane said.

Shane said Conor is the more studious of the two.

"I have to try harder, because a class like history, I have to really study over and over, where Shane learns it and doesn't forget," Conor said.

"Conor is artistic, where I don't know how to draw at all; my stick figures look trashy compared to his, so he has his talents." Shane said. "When we are the rec center playing against each other, we are super cocky to each other because we are good friends."

There is one thing Shane will not share with his brother.

"When we were little, our parents dressed us in the same clothes," Conor said. "Once Shane realized he could dress different, he makes sure we are not dressed anything alike. He even gets mad if we are wearing the same color socks."

"Being a twin is a fun experience," Shane said. "With sports, you just know where they are on the field or court because you have this connection."

"Sometimes it is a little creepy, because we think of the same things at the same time," Conor said. "It really happens."

"In basketball, I can grab the ball, turn around and throw the ball down court and I know Conor will be there and do a layup," Shane said.

The bond that both the Campbell and McGraw twins mention has been witnessed by their teachers over the years.

"What has been fun for me for me, one year I did a combo class of fifth and sixth grade, so I had both sets of twins for one class. I saw early on, they were hard working, conscientious about how they treated other students," Jackie Jones said. "When Shane got all state in track last year and Conor all state in basketball, you could see the pride in each brother's eyes about the other."

"They are amazing kids," said Cliff Jones, basketball coach at HEM. "It's nice when your good athletes are hard workers, good students and role models."

Zack Scott, the football coach for HEM, said "It's true they are amazing kids and we have known them since kindergarten and they have always been this way."

"It sort of chokes you up when you see the connection both sets of twins have with each other," Jackie Jones said. "It really is sort of beautiful."

"They are the sort of students you want in your school," Cliff Jones said.