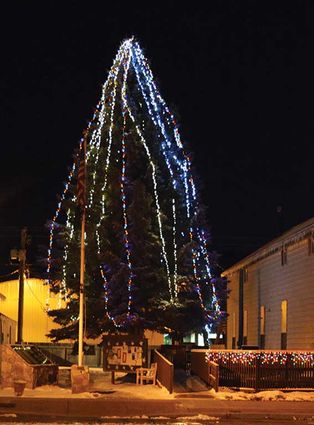 Saratoga resident Dawn Webster wanted a town Christmas tree. Talking the idea around, Rich Keely suggested to use one of the live trees around town instead of cutting one down.

Looking at the trees near town hall offered no clear candidates, then she saw the large fir in the American Legion's Khe Sanh West park downtown.

Webster then got in contact with Saratoga mayor Ed Glode who called the American Legion and got approval to use the tree in the park.

Next, Webster worked with Glode to find sponsors to pay for the lights. 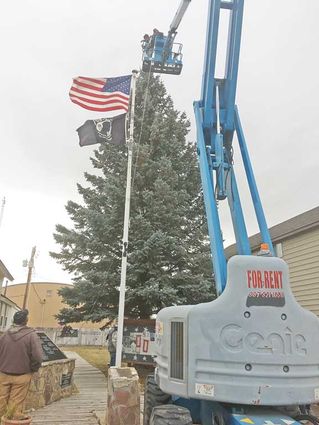 With sponsors The Country Store, Laura M, Duke's, The Rustic, The Sawhorse Saloon, and Bend the Trend Boutique pitching in, Webster then had to decide how to get lights up on the massive fir which is between two downtown business buildings and very near Lollypop's outside seating deck.

In stepped local contractor Jerry Fluty. Fluty volunteered his boom lift and services which made quick work of the job.

The lights were put up on the tree Fluty estimates to be between 60-70 feet high in a matter of hours Friday morning.

Though Webster had originally wanted to have a lighting ceremony, with the Christmas parade and Winter Wonderland scheduled for the coming weekend, it was decided to just have the tree lit in time for those events.