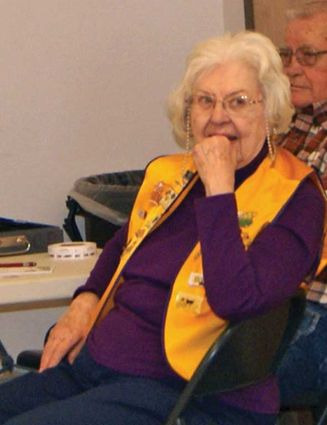 "Jeannette Fisher is a great person that believes there is good in all situations. She is positive in her own life, inspiring to others, and strives hard to be a positive influence in her community," Shelly Cooper, Medicine Bow Elementary teacher, said while describing Fisher."She is a best friend to others and an amazing neighbor to all."

Fisher is known to many Carbon County historians because of the years she has lived in Medicine Bow where she wrote for newspapers and archived vast amounts of information about the northern area of the county.

In addition to being a reporter, Fisher taught English and Home Economics at Medicine Bow High School and, before that school was built, Bow Basin High School.

"My brother would never have passed English if she hadn't been the teacher, because he didn't have a clue and didn't want a clue," Kay Embry, a longtime resident of Medicine Bow, said.

Fisher taught for 34 years in Medicine Bow, but she hasn't stopped teaching English. At Medicine Bow Elementary School, Fisher tutors children with their reading on a volunteer basis.

Fisher grew up in Harvey, North Dakota, where she graduated high school in 1948. She says being raised in a small town made her community minded. Fisher received her Bachelor's of Science in 1952. After graduating, she got a job teaching in Sidney, Montana. She did that for four years. Her next job brought her to Casper, where she worked for Natrona County as home demonstration agent from 1956-1959. She has worked with 4-H clubs, fairs and had her own half hour radio program each week on KSPR, now KTWO.

"Working at the radio station is how I met my husband," Fisher confessed. "This Medicine Bow cowboy had been listening to my program as he was making his rounds to various sheep camps and he decided he wanted one of our pamphlets put out by the University of Wyoming Extension Service."

Fisher said he came by her home while she was cleaning and in scrubs. She looked out the window and saw Rich, her future husband, for the first time.

"This incredible looking man got out of his truck and I immediately changed before going out to meet him," Fisher laughed. "He then came to the 4-H carnival and invited me me to the Lions Club dance."

Fisher said they got married in 1959 and she moved to Medicine Bow where she has lived since. The couple had two sons, Rob and Tom, both of who make their home in Wyoming. Rob is in Laramie and Tom in Saratoga.

Fisher started teaching Home Economics in 1959 and sometimes taught English, literature, history and girls P.E. She was also involved with Future Farmers of America, Honor Society and the pep club.

"She got a life service award because she gives so much to the community," Pam Glasser, president of the Lions Club, said. "She doesn't just pay her dues, she gives her dues."

"She is selfless whether it is churches, the Eastern Star, Lions Club or community," Glasser said. "She does volunteer work everywhere and she is tireless about it."

"Jeanette has been a member with Eastern Star for 64 years." Debbie Worman, Order of the Eastern Star member, said, "She is the longest serving member and a really sweet person."

"As a newspaper area reporter, I had attended a lot of Lions meetings covering guest speakers and upcoming Lions' events," Fisher said.

But as Medicine Bow lost population, so did the Lions Club and it looked to be in danger of closing.

"For this outstanding club to be considering folding was unsettling so I began asking several enthusiastic and dedicated people to join," Fisher said.

"One of the main purposes of Lions is to serve their community and the Saratoga club is a good example," said Fisher. "Look at the activities they sponsor that bring people to Saratoga, like the Bullfest, an ice fishing derby, skijoring and a casino night to name a few. These events would probably not be possible without the Lions."

Fisher believes the Saratoga club is one of the best in the state, although she is proud of what Medicine Bow chapter does.

"The Med Bow Lions have aided the blind and visually impaired by giving eyeglasses to those in need, children or adult," Fisher said. "We also collect eyeglasses that are no longer correct for the owner and then these are distributed to the less fortunate."

The Lions Club in Medicine Bow is involved with youth by having pumpkin carving contests, Easter egg hunts and all-age softball games.

For the general public, once a month the club does bingo, turkey shoots during holidays, and concessions at different events such as Bow Days and King Coal Days. 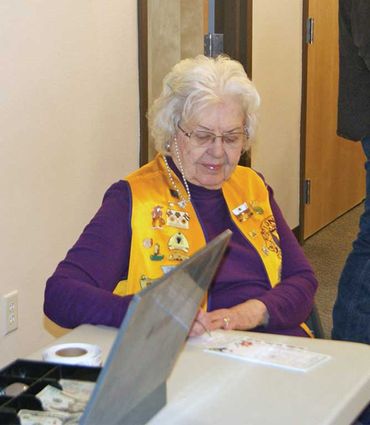 "I really want to say this because I am an avid newspaper reader and I read the Saratoga Sun from cover to cover," Fisher said. "We are appreciative of the Saratoga Sun which spreads the words which then sparks new ideas and successes and this enables people and clubs to do even more to make our towns a better place in which to live. It really brings this whole area together."

Fisher believes when the local communities and their organizations work together, it makes Carbon County a better place to live.

"I have always believed in clubs and their projects because we can do so much for our communities," Fisher said. "We need to boost our towns, our businesses, our clubs, our churches, our schools, our friends and neighbors because being behind each other we create success. We all need to get behind each other."

It is easy to understand why the Lions Club of Medicine Bow put Fisher up for recognition for her community service.