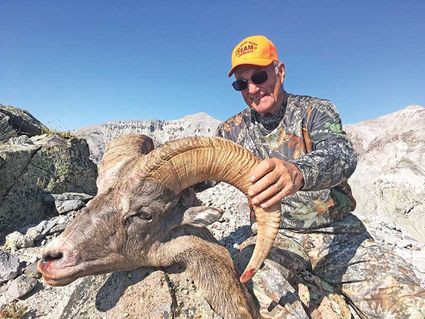 Doug Campbell with his trophy.

"Ready to go hunting?" asked Taylor Engum as he woke the hunters at 12 a.m. on September 1.

In an area with a high number of sheep and a once-in-a-lifetime tag, there was no way the group would allow anyone else to beat them to the opportunity.

The day before, Doug Campbell, Randy Raymer and Randy's son, Richard, met the staff of East Fork Outfitters at the trailhead and rode horseback into the Washakie Wilderness to begin a 10-day bighorn sheep hunt.

On the first day of the hunt, the group rode for two hours, gaining more than 1,000 feet of elevation along the way. After tying the horses and taking a short nap, the hunters and their guides began climbing the steep, rocky hillsides to gain more elevation before daylight.

As the sun rose over the barren ridgetop, the group spotted six rams to the north and two rams to the south. Big smiles were shared among the group as they began to strategize how to make an approach on the beautiful, elusive animals.

After several more hours of hiking, climbing and scrambling, the group began to near the bedded rams. As the hunters approached a shooting position, the warm mountain winds began to swirl towards the sheep. "This isn't good," said Taylor. And just as quickly as the rams were spotted, they disappeared up and over the rocky horizon.

Bighorn sheep are one of the toughest animals in the world to hunt. They have superior eyesight, excellent sense of smell and they have agile, rock grappling hooves that allow them to traverse the most severe terrain imaginable. Rams often position themselves on high, open benches where they have the ability to see long distances and they bed themselves where wind currents flow in their favor.

The next several days proved to be extremely difficult for both hunters and guides. Mornings began at 3 a.m. and guides did not often get to sleep until 10:30 p.m. or later. The physical demands included hours of horseback riding and steep-mountain climbs with heavy backpacks and rifles. Blisters and ankle sprains were common among all.

On September 5, the group left camp early in the morning to climb to an area where some rams had been spotted the day before. Randy stayed in camp with a blister that made any steep climbs impossible.

To reach the desired area, the group rode for over two hours then faced a grueling 1,300 foot vertical climb. Doug Campbell, 75, climbed the approach without hesitation. "I'm not going to quit," said Campbell.

Anticipation began to build as the last steep grades came into sight. When the group reached the top of the graveled ridge, there were no sheep in sight. Still hopeful, guide Bruce Kopperud instructed the hunters to be watchful because the rams could appear at any time from the numerous rock outcroppings.

After 4 hours of glassing, studying and staring at the rugged terrain, hope that the rams were still in the area began to diminish. Tired and sunburnt, Taylor stood up from the cover of the group's surveillance position to stretch his legs. While taking a drink of water from his bottle, Taylor looked down the barren slope and spotted a lone ram. "Don't move, don't move," Taylor said to the others while still clutching his water bottle to his lips. Tracing Taylor's gaze down the hill, the others locked onto the ram as well. From a sitting position, Doug raised his rifle to his shoulder and delivered a perfect shot on the ram from 120 yards. 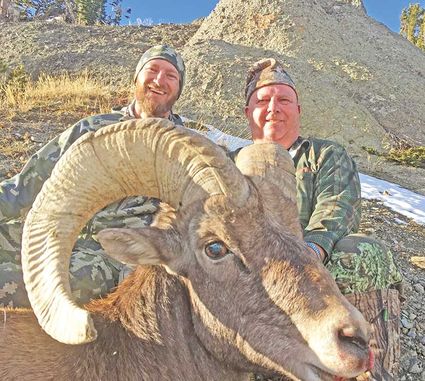 Richard, left, and Randy Raymer with their Bighorn sheep.

On October 27, Randy and Richard returned to the wilderness with guide Taylor Engum for a second hunt. Late in the afternoon, a group of rams were spotted high above the trail. After a quick stalk, the hunters moved into a shooting position within 300 yards of the bedded rams. As the wind swirled towards the sheep, the lead ram stood up and stared nervously toward the hunters. Seconds later, Randy made a perfect shot on the ram, bringing to a close a long and challenging season.

The joy and relief of harvesting a bighorn sheep brings tears and laughter to both hunters and guides. The physical and mental challenge of hunting Wyoming bighorn sheep is the experience of a lifetime that cannot be matched.