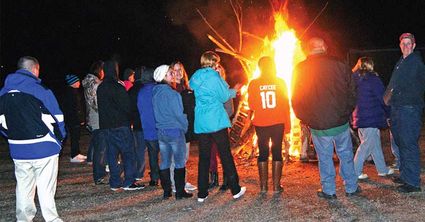 "The soup is pretty good," Basil Phillips, football player for Hanna, Elk Mountain, Medicine Bow (HEM) High School, "I thought this was a pretty good idea and cool how it was hosted."

Phillips was talking about the first Soup Fest and Rally held at the Hanna Recreation Center that started at 6:30 p.m. on Thursday

"It's excellent and it is a good way to bring the community out to enjoy this time together," Rose Vaughn, Rawlins National Bank Hanna Manager and one of the soup judges, said as she got a tasting bowl of another soup. "Hopefully we will have a winner soon."

"I think it was a great idea and Vivian (Gonzales) has done a great job," Kyle Young, owner of the Hanna Mart and another soup judge.

"Everyone really outdid themselves on the soup because all of them been very good and tasty," Debbie Dancik, Postmaster of Hanna, and another judge said. "It is going to be hard to pick one, or even three, as the best."

Division Chief of Carbon County Fire Department, Hanna Department, Tim Born, a judge for the soup tasting, said he was happy with the turnout and deciding the winner of the soup contest was difficult. Born was also the coordinator for the ignition of the bonfire for the HEM rally to be held after the soup fest.

Close to 80 people attended the soup tasting, not including the four judges.

Vivian Gonzales was happy almost a dozen soups were presented to be judged. She said the idea for the soup rally came from several members of the community. The town getting together and sending the sports team off in a rally has never been done in Hanna before, so Gonzales didn't know what to expect.

"I am pleasantly surprised by the turnout, but I always am when I start something new," Gonzales said. "I am very happy with the participation of the soup attendees and the teams coming in. I am really thrilled it turned out so well."

The top three soups got bragging rights to go along with a ribbon, certificate and a month free family membership to the Hanna Recreation Center. 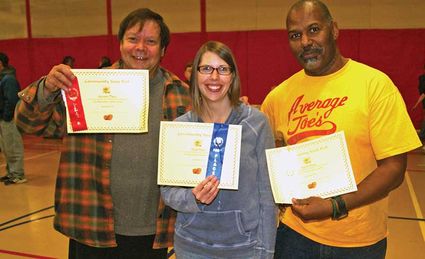 The judges did come to a conclusion after about an half hour and awarded Amelia Young first place for her Cheesy Potato. Mike Armstrong took second for his Turkey Meatball Garden Vegetable and Joe Fowler rounded out third with his Cream of Chicken and Potato.

Immediately after the awards were given, the crowd moved outside behind the recreation center and a bonfire was started under the watchful eye of Born.

The crowd went into chants, cheers and applauded the teams going into post season play.

"I think it was a fabulous event and I am really proud of our community for showing up, the way it did," Beth Kostovny, manager of Wee Folks, said as she helped clean up from the soup tasting.