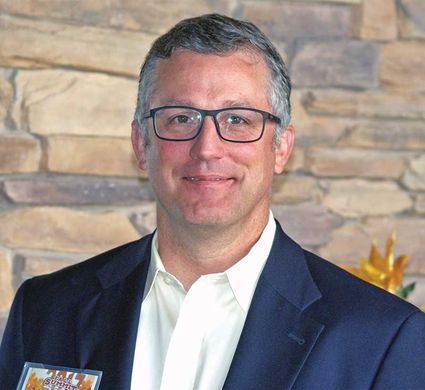 Jason Campbell, WLRA board member, attends the Fall Summit for Tourism and Hospitality.

Heavy hitters for Wyoming's second largest industry met in Saratoga at the Platte Valley Community Center Wednesday and Thursday for board meetings and round table discussions.

The Wyoming Travel Industry Coalition (WTIC) and the Wyoming Lodging and Restaurant Association (WLRA) co-hosted the hospitality and tourism fall summit. Besides board members and representatives from WTIC and WLRA, there were officials from the Wyoming Office of Tourism (WOT) and the University of Wyoming (UW).

Leisure and hospitality is the largest employer among private industries in Wyoming, and the conference was held to allow industry professionals to brainstorm and be informed of business and activities that affect tourism and hospitality.

UW was at the summit to share the latest update on a natural resource and tourism degree program being offered by the University.

According to data from WOT, Wyoming had 8.5 million overnight visitors in 2016. Domestic and international visitors spent $3.2 billion. This comes out to $103 per second over the year. WOT said in 2016, visitor spending directly affected Wyoming's economy by generating $171 million in local and state tax revenue and three percent of Wyoming's gross domestic product (GDP) comes from travel and tourism.

Carbon County alone garnered 763,000 overnight visitors which created $8.8 million in state and local taxes in 2016 WOT said. In Carbon County, 14.3 percent of private industry employment comes from tourism. WOT said without jobs generated from the tourism industry, the 2015 unemployment rate would have been 17.9 percent instead of 3.6 percent.

The stakes are keeping tourism strong in Wyoming is apparent to the professionals of this industry and with state funding getting cut, travel and hospitality organizations are looking at ways to keep tourism funding consistent.

There are three ideas for funding the WOT discussed at the different meetings concerning tourism:

The first is to continue relying on Wyoming's General Fund. That is the way WOT has gotten its funding in the past. However, with cuts the state has been doling out to Wyoming agencies, it has become difficult for WOT to count on consistent resources for their department.

A statewide lodging tax of 3 percent is how county visitor boards get funding. WTIC says the local option lodging tax is earmarked for local travel and tourism promotion only and is voted on every four years. This is an economic development tax and confined to promotional activities to increase local revenues by increasing visitors.

WTIC says Wyoming law specifies the tax should be used for travel and tourism promotion by the county or city approving the tax and is limited to promotional materials, television and radio advertising, printed advertising, promotion of tours and other specific tourism related objectives. None of the lodging tax revenues can be used for capital construction or improvements.

This tax can make rooms expensive and could lead to a downturn in visitors. According to a 2008 study by the American Economics group. That group found high room taxes can adversely affect travel revenue by shortening visitors' stays, and by reducing spending in retail stores, food establishments and other businesses.

The third idea is to have a 1 percent sales tax on the leisure and hospitality sector across the state. This would mean a dinner would be one percent more expensive, as would rooms and tours. This scenario is the one the different associations discussed with enthusiasm in their meetings. However, the legislature must approve this tax, and there are state legislators committed to not allowing any new taxes, no matter how helpful it is to an agency like WOT.

Besides discussing funding alternatives, the WTIC, WLRA and WOT held board meetings and round tables to discuss ideas to promote Wyoming's tourism and hospitality sector.

Jason Campbell, a board member on the WLRA, said the summit was beneficial to the tourism and hospital industry in several ways.

"It is a forum for all of us to make sure we are on the same page," Campbell said. "The big thing we have been working with Wyoming Office of Tourism is finding alternative funding and one such way, is the one percent."

Campbell said the one percent tax is going in the right direction, but it is going to require a lot of work to get it approved in the legislature.

"One of the things you are always faced with ... it is a tax-and communities in Wyoming are not big fans of taxes," Campbell said.

Campbell said to get WOT out of the general fund, an alternative like the one percent tax on the tourism and hospitality is helpful, not only because the money from the general fund that would normally go to WOT can go elsewhere, it allows for a more consistent revenue flow.

Campbell was glad to have the summit in Saratoga because it gave an opportunity to show off the Platte Valley Community Center and the hospitality the town has to offer people that stay overnight.

Wednesday night a reception was at the Saratoga Hot Springs Resort where the attendees got to mingle with each other from 6 to 8 p.m. Afterwards, many went off to the different venues for dinner and got to enjoy Saratoga hospitality.

Next week, the Sun will not only have the interviews of Brown and Shober, but also go over UW's vision for the natural resource recreation and tourism degree and report on the Thursday meetings that discussed alternative tourism funding.