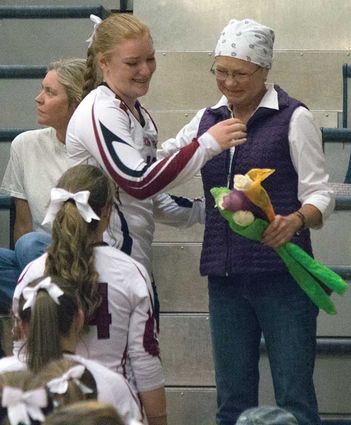 Saturday was described as an emotional day for the Saratoga Lady Panthers and the Encampment Lady Tigers as the two met in Saratoga to vie for points in the rapidly concluding regular volleyball season, and by the end of the match, emotions would be running even higher.

The Tigers ended up one win closer to earning a place in playoffs, and the Panthers were facing the very real possibility of ending their season without going to state. And that was just backdrop for another emotional event; honoring a Saratoga Elementary School teacher, Annette Mason, who is battling stage IV lung cancer.

The game was a "whiteout" game, with members from both teams wearing white as they warmed up and wearing white ribbons in their hair to honor the teacher. The crowd was almost completely dressed in white as well in honor of the occasion.

The game began as usual, with the pledge of allegiance and an introduction of the opening lineup of the two teams, with the guest Tigers being introduced first. As the Lady Panthers were each introduced, they each held a flower. After being introduced, each girl ran to the stands to give her flower to Mason.

Next, the Lady Tigers of Encampment lined up to meet Mason, each taking the time to hug and shake hands with the popular Valley elementary teacher who had most likely affected the lives of most of the students in attendance in some way.

The game would soon get underway, but not until the crowd of parents, fellow students, school district employees and fans of the teams stood in ovation for Mason.

The match got underway, with Encampment taking the early lead. Encampment immediately got off to a commanding 5-1 lead. After getting on the offense, however, the Lady Panthers ran up the score, eventually closing to within a few points of the Tigers.

Their rally was short lived, however, and the Tigers took the lead and expanded upon it.

Eventually Encampment closed out the first game with a score of 25-9. During each successive game in the three-game match, Saratoga would put more points up in both, but it would not be enough to win.

"It was just an emotional day, I think," Shayley Love, the Saratoga Lady Panthers' head coach, said. "Everything going on, and we had to make some adjustments this week in our team and with those adjustments obviously come some bumps."

As for the Lady Tigers, their head coach, Robin O'Leary said their goal for the season is to incrementally improve during each game of the season, with the hope of seeing their performance hit its peak during regionals and state finals.

"We've been working hard on letting mistakes go and moving on to the next ball," O'Leary said. "They seemed to do that really well today," O'Leary said of the team.

Defensively, the Lady Tigers showed their toughness, denying the Panthers a lot of scoring chances and keeping the girls from Saratoga on their heels. Overall, the Tigers hit 36 kills over the course of the match, with nearly half of those brought to the court by up-and-coming sophomore Paige Powell.

"The girls are focusing on serving each other, not just in volleyball but in life, trying to do nice things for each other on and off the court" O'Leary said of the team. "That effort off the court is paying off on the court for us.

"We're fortunate that we're pretty strong in most of our positions so if someone else is having an off day, someone else can step up."

For Saratoga, the team's kills were down over previous weeks, with a total of 10 compared to Encampment's 36. Eight of those were delivered by four netters; Makiya Johnson, Shianne Baker, Tiffany Bauer and Taylor Bennett. Each had two.

The Lady Panthers, though, showed tremendous initiative in digs, taking to the ground 44 times to prevent scoring by the Lady Tigers.

"We've just got to regroup," Love said of the team. "We're down to a tournament and two conference games so we're just going to regroup."

Love added the team looks great in practice, but when it comes to actual games, the teammates' nerves come out and things don't work out as well. Love said the key for the team going forth will for the Lady Panthers to learn to capitalize on the things that go well for them, control what they can, and learn to deal better when things don't go their way.

For her part, O'Leary of Encampment said she was impressed by Saratoga's effort. Saratoga, she said, is a very competitive team that works hard, but is faced with stiff competition in what is likely the toughest 1A conference in the state. The team is also young, she said.

"Our chances of regionals are really slim right now and it's unfortunate," Love said. "We've beat the number one teams from other conferences already."

As the two teams began to file off the court, it was announced that the fundraising efforts at the whiteout game managed to raise $512 for Mason, who stood by and happily watched her students from across the Valley play volleyball.

Despite the fact the Panthers and the Tigers are cross-Valley rivals, both showed respect for one another and their abilities, and all showed respect for Mason, who joined the ladies from both teams at center court after the game was over.

There, she was treated to more hugs from athletes and coaches, as well as another standing cheer from audience members. After the check was presented, Mason stood off from the crowd of volleyball players and put up her hand. They gym fell to silence.