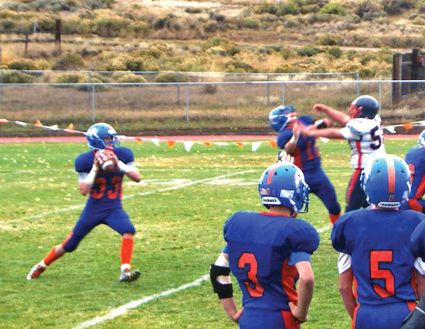 The Hanna, Elk Mountain, Medicine Bow (HEM) Miners football team was not the first team to score when they met the Lingle Doggers football team, but when the game was over, the Miners showed they are team to be reckoned with. The Miners won 43-30 on Saturday before a home crowd.

Football coach Zack Scott was happy with his team's effort when the game ended.

The Miners did start off a little slow, getting down to the Doggers' 12 yard line in their first possession and not being able to score, but Basil Phillips started getting some key tackles and Conor McGraw and his brother Shane went on scoring drives. Going into the second quarter, the Miners were ahead 12-8.

The Doggers stayed in the game, getting another touchdown with a little over a minute to play in the first half, making the score 24-16. Tylor Goodro and McGraw were not going to let such a close score happen going into the second half, with Goodro connecting to his receiver for six more points, making the score 30-16.

At half time, the wind blew in a storm with lightning and cold rain that ended up delaying the game for over half an hour. Fans found shelter during the storm and braved the rainy weather once the game was resumed. There was concern amongst fans the field had gotten very slippery and would affect the game.

The Doggers did score first in the third quarter with three minutes left, and the score became 30-22. Conor McGraw answered with a touchdown making it 37-22 going into the fourth quarter.

Phillips was forcing incomplete passes and Goodro got a fumble in the fourth quarter with Conor McGraw scoring again, making it 43-22 with three minutes left. The home crowd breathed easier. Scott had praise for Phillips' efforts.

"Basil is unbelievable, he is coming into his own," Scott said. "He is becoming a heck of a football player because I can count of him on him for offense, but defense is where he lives and he is doing a great job. I am really proud of him."

The Doggers did put on some more points with a little over two minutes left in the game making the score 43-30, but the Miners held onto the ball at the end, running out the clock to get the win.

"Our blocking was amazing this week, that is credit to Brendon (Reeves) and Devon (Grosstick) because they are why our sweeps were there and that is why could do what we could do."

Scott said the plays by the McGraw twins made the game fun. Conor scored 31 points and Shane scored 12 points. Goodro passed for 183 yards with 13 attempts and 10 completions.

"I couldn't be more proud of this team and we are one step closer to where we want to be," Scott said.