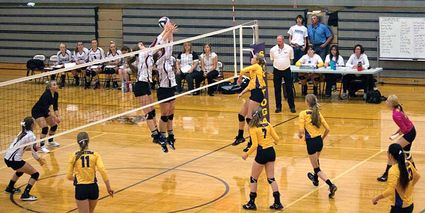 The Encampment Lady Tigers traveled to Laramie Friday to take on the sophomore teams from two much larger schools, Laramie and Cheyenne South. The Tigers handily defeated both teams in back-to-back sweeps.

Against Laramie, the Lady Tigers delivered a one-two knockout with scores of 25-17 and 25-18. Against Cheyenne, the team again swept their rivals 25-15 in both games of the match.

Against Laramie, the team killed 19 times and had 36 digs. Encampment's Paige Powell took to the ground 10 times to make digs and led the Tigers in kills, with seven to her credit.

Noelle Peterson had the most digs against Laramie with 12.

The two Friday games did not count toward the Tigers' conference wins, but did elevate the team's overall win-loss record to 9-2 prior to the team's Saturday bout against the Saratoga Lady Panthers. (see "Valley Cats hold Whiteout" on page 1)

In conference play, the Tigers stood on a record of 3-2 prior to their outing against Saratoga. Currently, the team is ranked second in the 1A division behind the Rattlers of Little Snake River School in Baggs.