Wright does no wrong in win over Saratoga 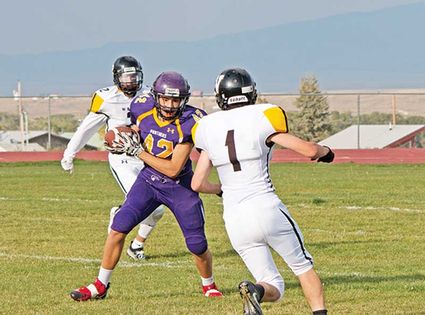 Gray clouds blew into the Valley Friday afternoon, and as the occasional drops of rain fell on the field at Saratoga Middle/High School, the Panther football team was busy trying to find the proverbial silver lining which every dark cloud purportedly possesses.

Facing off against Panthers of another color-the black and gold Panthers of Wright in Campbell County-things went bad quickly.

The Wright Panthers scored 20 points in the first several minutes of the game, giving the Saratoga Panthers a huge deficit to try and make up.

"Pretty much everything that could go wrong did go wrong in the first three minutes," Saratoga's head coach Kegan Willford, said. "Whether it was rough punts, fumbles or interceptions."

Saratoga kicked off, and the bad news started coming right away after a Wright player caught the kickoff and ran it back deep within Saratoga territory. In the first couple of minutes of the game, Wright had its first touchdown after its opening drive.

An interception by Wright then allowed a player to run the ball back to within spitting distance of the goal line, allowing the Panthers from afar to score their second touchdown of the game a mere five minutes into the affair, with 7:09 left on the clock for the first quarter.

A fumble recovered by Wright mere seconds later was run back for touchdown with 6:54 left on the clock. A failed field goal by Wright left the score at 20-0.

By the end of the first quarter, Saratoga's defensive line, which the team relied on heavily over the last couple games, began to gel and eventually closed down Wright's path to easy scoring.

"After the first three minutes, I felt like our team responded and played it out right, because after the first quarter it was a 14-8 game," Willford said.

Saratoga's defense again carried the day, holding the Wright Panthers to 14 much harder-earned points. Wright did go on to win the game by a score of 34-8, Saratoga's only points coming from a long touchdown run by Wyatt Cox and a successful 2-point conversion in the last minutes of the game.

Willford said his team's defense is strong, despite the first few minutes of bad luck in the game. But he also concedes that a strong defense is not enough to win a football game.

Willford's goal for the team will be to train hard on offense over the course of the next week and develop more depth there. Last week, three players on the offense were absent due to injury and a roster issue. 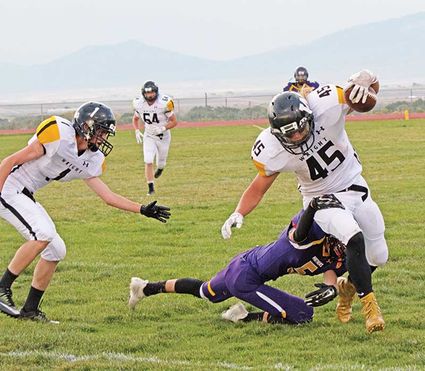 This week, the injured players were able to play but the player who is not able to suit up because of roster technicalities was out, meaning the team was able to field 19 players. "It may not sound like much (the increase from 17 to 19 players geared up and playing) but it makes a huge difference in the depth of the offense," Willford said. "It was an improvement over last week, it really helped our depth and kids didn't wear out as fast."

Going into the week, the team will be focusing on deploying some new blocks, and going forward will work on keeping the team's quarterback in the pocket. Willford said he was planning on hitting hard on blocking.

"I'm still really pleased with what the kids are doing," Willford said. "Nobody is giving up, the kids still have really high morale and hopes at this point, and they're just looking to get better so we can improve the team."

The Saratoga Panther's next game is scheduled for 5 p.m. Friday against the Burns Broncs in Burns.