Firewater gets past renovations, growing pains 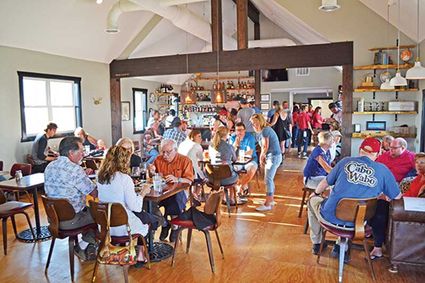 In February, Danny Burau, owner of Saratoga's new restaurant Firewater Public House, told the Saratoga Sun in an interview that he hoped the restaurant-which was undergoing renovation at the time-would be open by the first weeks of summer in order to capitalize on the Valley's lucrative summer tourism season.

By the time the restaurant opened August 19, the bulk of summer had passed, leaving the restaurant the last couple weeks of the season to pull in customers and sales before the long, cold winter ahead.

Despite the delays in opening the restaurant and some of the teething pains-and negative reviews on websites such as Yelp!-that come with opening a new place, Burau says he is convinced after everything, that leaving Denver and Moving to Saratoga to open a new fine dining establishment was the right thing to do.

Much of the delay in opening Firewater came because of unforeseen issues with the building itself, Burau said. First there were issues with the foundation that had to be addressed. Then, the next major delay came when the fire department informed Burau the ventilation hood that came with the property when he purchased it was not compliant with regulations.

The hood, he said, was designed for kitchens that merely warm food up, not those that cook it fresh. The hood debacle added weeks to the restaurant's open date, since it can take months for a manufacturer to make, ship and install a hood in a new restaurant.

The teething pains that led to an opening weekend that wound up with some negative reviews online for the new business came because there is always a learning curve with a new staff, new menu and new kitchen, Burau said. It also didn't help the restaurant didn't have an occupancy permit issued until a day before the scheduled grand opening, so the staff didn't even have an opportunity to train for a day before being thrown into the crucible.

But, things are getting better as the crew gets into the groove of working the restaurant, Burau said. Ticket times are down, wait times are diminishing, the staff has gotten used to the new point-of-sale software, and the bugs have been worked out of the kitchen and it now seems to be firing on all cylinders.

The restaurant also is beginning to develop more of an identity, something some customers seemed confused about initially, Burau said. "We aren't here to directly compete against anyone in town," he said. "We're here to offer another choice; Our mission statement is to help people enjoy Saratoga more."

Some customers were confused thinking the establishment was a craft distillery, Burau said, because of the restaurant's focus on a whiskey bar. Others were not sure what type of food to expect.

The food is "southern with French influence," Burau said, though adding that much of the French identity has been removed. One of the restaurant's best sellers, Crispy Duck, is very similar to the classic confit de canard. The fries with gravy are an American take on French-Canadian poutine, a dish once virtually unknown this side of the St. Lawrence, which has become a cult hit in some parts of the US in recent years.

There may be have been a lot of surprises along the way that delayed the opening of the restaurant, and some things may not have gone as hoped, but Burau is proud of the quality of food the kitchen produces, and the value it represents.

In the February interview with the Sun, Burau said his goal was to offer high quality, house-made meals with an entrée price around $20. In that regard, the restaurant has succeeded; most entrées on the menu are around $20, with most being less.

"I am really happy with the quality we've gotten out of the kitchen and these dishes," Burau said. There are hardly any components of a dish that are not house-made. Even hamburger buns are baked in-house.

Now that some of the pains and travails associated with opening any new restaurant are behind them The food, Burau hopes, is what will shine though to restaurant patrons. He hopes his attempts to bridge the gaps between classic Southern comfort food and haute cuisine will play well with tourists and residents.

"At some point in time, it has to be about trust," Burau said. "Customers have to develop a trust that what we put on the plates will be good."