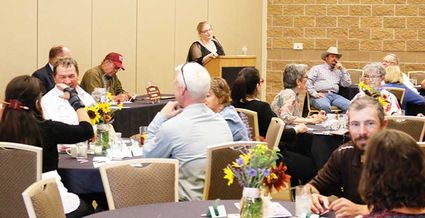 The fundraiser brought in money for the museum and brought to town famous Wyoming author, and former Saratoga Sun reporter, C.J. Box. About 30 attendees at the event had the chance to meet Box, sample food from Saratoga's newest restaurant, Firewater Public House, and had the opportunity to support the Museum.

Box, who worked at the Saratoga Sun in 1981, is an internationally famous author and New York Times Bestseller. Box is the author of 22 novels, including 20 in the Joe Pickett mystery series. Most of Box's novels take place in various Wyoming or western locales, with Box drawing inspiration from real places across the state.

At the event, patrons had the opportunity to buy copies of Box's novels and have them autographed by the author.

Later, participants got the chance to try food from Firewater Public House, a restaurant scheduled to open in Saratoga later this month.

After dinner, attendees answered trivia questions about six of Box's books, including his newest release, Paradise Valley. Patrons finished off the evening with a live auction of a wide variety of items, including a brunch with the author and his wife, and even naming rights for a character in an upcoming novel.

As of press time, The Saratoga Sun was unable to reach a representative of the Saratoga Museum to find out the amount raised during the event.