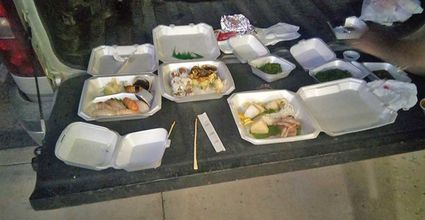 It was a Monday. If you know anything about my normal Mondays they are usually pretty hectic and go fairly late as we try to get as much of the paper done as we can so the staff and I can proofread on Tuesdays before we get the Sun to press.

This particular Monday we had our normal frenetic day, but were mostly done by 5 p.m.

I was relieved and decided to go have a drink after work.

The plan was to just have one or two then go home and use the unusual free time to clean house a bit.

You know how that works.

So I am sitting at my favorite watering hole talking to-let's call him Flynn (yes, I have changed names to protect the guilty)-about my love life (or lack thereof) and general other noncritical subjects when a buddy of his-how about Brad for this one?-comes in and asks Flynn if he is ready to go over the range to get some food.

Brad reminds him that the day before Flynn had said he was craving food from a particular joint on the other side of the Snowy Range and that he had said he was going to get some Monday.

We kind of laughed because it was already 7 p.m. and Flynn and I were already several drinks in.

But the conversation remained on food as Brad joined our table.

Eventually we got to the topic of sushi and Flynn began telling of a hole-in-the-wall place that serves good and reasonably-priced fish.

As we all agreed we liked sushi, talk began to form around actually making the trip.

You could see the hungry glint in our eyes.

A Google look-up later, we found the place was closed on Mondays.

I mentioned a place that "you ought to try" near the university which brought on another Google look-up.

We could make it.

Brad had only had a half drink and was eager to make the journey.

The next scene in my tale involves the three of us piling into Brad's truck and hightailing it out of town.

I would love to tell you Flynn and I were boy scouts and didn't drink anything going over the range. I can tell you our driver was virtuous though-and we didn't even really exceed the speed limit.

We laugh and joke all the way over the pass.

The trip brings to mind college trips for all of us.

Close to Laramie, Flynn calls the restaurant, lets them know we are coming and places our order.

It's close to closing time for the restaurant as we run through the maze of construction that is summertime Laramie.

But we make it.

Brad goes in the restaurant, but Flynn and I decide to water some truck tires.

By the time we get to the door, it's locked.

The waitress is waiting though and opens it for us as we sit a short bit for our food.

Eventually the server brings us two large plastic bags containing styrofoam boxes of our order and we make our way out the door after tipping extremely generously.

The next concern was where to eat the food at.

Our solution was to back up to a brightly lit, but closed, business, lower the tailgate and go to town.

Only in Wyoming can you see two big cowboy-looking guys and me eating sushi with chopsticks off the back of a tailgate.

After quickly dispatching the fishy goodness, Flynn decides we need to stop by the world-famous Buckhorn Bar.

I'm in a good mood so I agree all the while thinking we'll have a short visit then head back.

We go to get gas and decide we're hungry again.

Off we go to a fast food place where we all order the same humongo meals-then back over the range we go.

Sometime in the wee small hours of the morning I get dropped off at my house and almost immediately hit the mattress.

I hear the alarm.

The insistent chirping is annoying.

I hit the snooze.

Then I remember it's Tuesday.

I bolt upright and hit the shower.

I feel about like you'd expect, but I make it to work only slightly late.

My staff has no clue I got about three hours sleep (until I tell them) and I surprise myself by working fairly efficiently-and we get the paper out.

The reason I wrote this (besides it being fun) is to remind you all that you can "turn back the clock" yourselves if you are willing to be spontaneous.

Here's to being purposefully stupid once in a while.