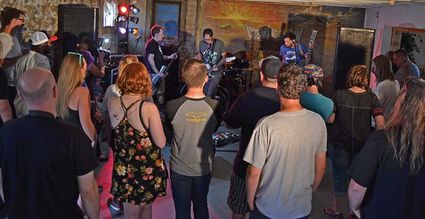 The vibe was frenetic but friendly and I could hear music spilling from the Virginian Hotel in Medicine Bow as I pulled up to a full parking lot Saturday afternoon.

I noticed tents dotting the area with more being erected as I found a spot to park behind the historic and stately hotel.

I had come to see the ninth annual Battle of Old Wyoming (BOW) as the boisterous and free alternative music festival is known.

The co-owner of the Virginan, Vickie Scott, was very nice as she immediately introduced me to Brandon Schulte who is the Battle's current organizer.

During an interview, Schulte highlighted the nine years the alternative music event has been in existence and pointed out that the event has traditionally given new and different bands a venue they might not otherwise have.

"We want this to remain kind of the alternative music thing," Schulte said adding, "On our end it is all volunteer. As the person organizing it, all of the bands work on ... nobody ever gets paid. There's never been a ticket cover charge or anything like that. We want the money spent in town. If you don't do things in these wonderful places like this they close and they go away forever."

Though Schulte has been running the show for eight years now, he is quick to attribute the event's existence to the "Godfather of the event," Tom French.

French, who was on hand (and seemingly everywhere) this year to digitally capture scenes of the bands who played the BOW said the idea for the event came to him while stopping for a cheeseburger at the Virginian and realizing Medicine Bow was a good "halfway point" between Casper and Laramie.

Having been involved in music promotion in the area French said, "the rest was easy."

The music is raucous and not what anyone would consider "stereotypically Wyoming."

The event carries an energy level one would expect from a generally youthful crowd drawn mostly from Casper and Laramie.

Though the crowds, which I estimate to have been between 100-150 people, started the afternoon interested, the crowd did not really begin to fire up until dusk fell and the near full moon made it's appearance over the crossroads town.

Eventually people were jumping to the high energy tunes and a full-blown mosh pit sprang into existence for the last few bands.

If you are into punk and rock more on the metal or electronic side, the quality of the tunes played was of a generally high caliber. Some covers were done and given interesting twists.

Late in the evening, the crowd seemed to enjoy the quirky band Zenitram. The Rock Springs duo came dressed punk. Zenitram Jr. wore a hood while T-Slice sported a "slice of pizza" costume as they belted out offerings that had the assembled jumping.

Twenty-five bands in all played the weekend with four performing Friday night and 21 packing Saturday's schedule.

Plans for the ten year BOW anniversary are underway and the event is scheduled for the first Friday and Saturday in August of 2018.