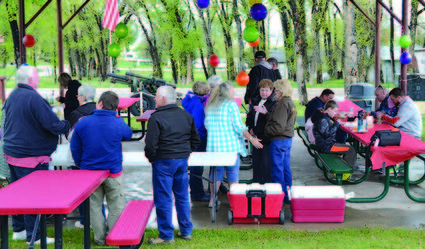 Catherine didn't know there was a party.

Her husband, Pat, had placed an ad in the Saratoga Sun about the retirement party Saturday at Grand Encampment park, but then hid the paper from her.

Long time Encampment teacher Catherine Lynch only found out about the surprise retirement party held to honor her years of teaching when a well-wisher let Lynch know that they would be unable to attend the party.

Mrs. Lynch seemed pleased by the result, though. She shared stories of her last day teaching and how touched she was by gifts and letters from former students and visited with many of her friends, former colleagues and students at Saturday's barbecue and party.

In 1976 Catherine married Pat, who was working for the Forest Service in Encampment.

As the couple were getting settled in the area, the school called and asked Catherine if she would be interested in teaching.

Lynch went in for the interview and didn't really know if she had gotten the job.

So Pat and Catherine went on their honeymoon.

When the couple returned, Pat was told that Catherine really needed to get ahold of the school.

They wanted to know when she could start.

Over the years, she taught high school English and eventually even Spanish. 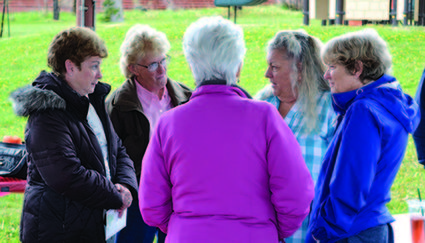 In 1981 Lynch took a break from teaching to raise her first child. Soon the family would add another child.

In 1999 Lynch was ready to return to the Encampment School and restarted her career as an aide.

Eventually she would be asked to teach fourth grade and Wyoming history-a position she truly enjoyed. That transitioned into teaching third grade for the last ten years of her career.

Pat and Catherine are planning a cruise to Alaska in the near future and a family reunion later this year. The couple are also looking forward to a new grandchild in the fall.

Other than that, Pat seems to think there is plenty of gardening in the years ahead.